It looks as if Warner Bros. is looking to extend its animated spectrum. Up to this point a long list of animated films based on DC properties have been released and most seen with critical acclaim. But it seems that the execs at Warner Bros. are looking to give Watchmen another go. The comic series written by Alan Moore was adapted to film by Zack Snyder in 2009 and was seen as a little controversial. One of the main problems pointed out was the small form story didn’t give Snyder and Co. enough time to fully tell the complex story. Most people called for a HBO style series based on the comic with Snyder’s gritty take but it seems as if we might be getting something a little different.

The news comes from FilmBuffOnline, who have acquired a survey sent out to potential customers about their interest in  buying an animated Watchmen film. The image also features a description for the film. Although, nothing is confirmed. A major studio wouldn’t send out something like this without being serious about a project. 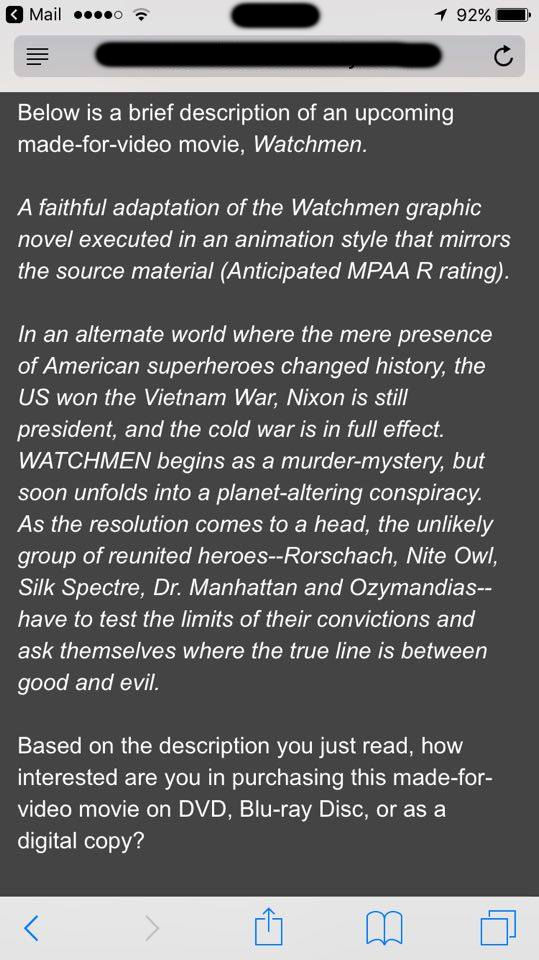 The second part of the forwarded questionnaire asked which of several titles from DC Comics and its Vertigo imprint they owned or were familiar with. Among the titles asked about were Moore’s run on the horror series Swamp Thing and his  Batman graphic novel, The Killing Joke. It also included the Batman story  “A Death In The Family,” the graphic novel Batman: The Long Halloween and the series Gotham Academy, the Superman story Red Sun, the video game-inspired Injustice and their Scooby-Doo science-fiction horror genre mashup Scooby Apocalypse. DC’s Vertigo line was represented on the survey with Fables, Lucifer, iZombie, Hellblazer, Preacher and Sandman.

All these stories have a darker tone and after the release of ‘Batman: The Killing Joke’ last year, it can be assumed that DC Animation may be looking to continue the darker tone.

This is a lot to take in and adaptations of all of these properties is unlikely although not impossible. The Watchmen film does seem to be in the works though and maybe it can grab the tone that Snyder’s attempted. –Jackson Hayes