Filming is underway for the next Avengers film and there are already a few set pics leaked. Now we have a pretty good look at Iron Man’s new suit in Infinity War, definitely looks different than previous versions.

Thanks to Twitter User Marvel_Freshman, a new set photo reveals Tony Stark’s new armor and it looks awesome. It’s just the torso but it’s quite clear how the new suit will look like before the VFX is added.

Another image surfaced online and it’s a much higher definition. Courstesy of JustJared. 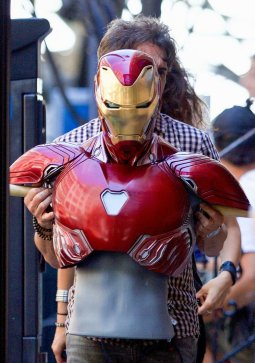 It’s pretty different looking suit than we’ve got before, and we can assume there’s a reason for it. Perhaps Tony can travel through space with this one, which would makes sense because there probably will be some space scenes in this one. It also looks pretty comic-booky, and almost has a more sci-fi look to it.

What do you guys think? Be sure to tweet at SuperBroMovies with your thoughts. – Marcos Melendez