Was He Slow? Edgar Wright adds another tremendous film to his portfolio with his latest flick, Baby Driver. Baby Driver is simply fantastic, a true thrill ride from start to finish, set to some classic throwback tunes! From the first frame, to the last Baby Driver is loud, stylized and a nonstop truly great time, hands down one of the most stylized movies I’ve seen in recent memory, or ever.

I really have nothing but great things to say about Baby Driver, it is a simple yet interesting plot where as an audience we follow Baby, an expert getaway driver who jams out to tunes 24/7 working for and with a handful of colorful, intriguing bank robbers until things go south! The whole cast simply ROCKS, each member absolutely kills it, not a single person drags the movie down, only elevates it higher! The cast is led by Ansel Elgort as Baby, who makes Baby one of the most likable protagonists this year, and his relationship with Lily James’ Debora is simply adorable and you really are rooting for them to be happy! 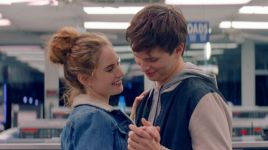 The colorful crew of bank robbers is led by none other than Doc, a confident, calculating and entertaining strategist played by Kevin Spacey. The Bank Robbers include Jon Hamm’s Buddy, a pretty likable relaxed guy, until someone pisses him off, and the Bonnie to Buddy’s Clyde, Darling is a sweet but cunning criminal played by the lovely Eiza González, but the funniest character, hands down is Jamie Foxx’s Bats, who delivers some hysterical quips and memorable lines.

The Action in Baby Driver is so real, the car chases are amazing, and with bare minimum (if any) use of CGI is even cooler, you really are watching these incredible car scenes take place to some awesome music! Speaking of Music, something the actual plot revolves around, Baby Driver is practically a musical! It uses music in the best way possible, even beating out the use of music in this summer’s Guardians of the Galaxy Vol. 2, every beat is synchronized to the movie and it is truly a treat. You will definitely go home and download the album (I know I did).

To keep it simple, go see Baby Driver! It really is a triumph for movie making and I applaud Mr. Wright and the cast for making a truly memorable thrill ride that fires on all cylinders! 5 Stars! 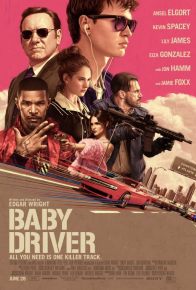 RT The Review on Twitter (Link: http://bit.ly/2skrNxc) for a chance to win this poster signed by the cast of BABY DRIVER and a copy of the soundtrack! Choosing a winner Sunday July 2nd! MUST BE A FOLLOWER!

Baby Driver is currently in theaters!

Talented getaway driver Baby (Ansel Elgort) relies on the beat of his personal soundtrack to be the best in the game. After meeting the woman (Lily James) of his dreams, he sees a chance to ditch his shady lifestyle and make a clean break. Coerced into working for a crime boss (Kevin Spacey), Baby must face the music as a doomed heist threatens his life, love and freedom.

One thought on “BABY DRIVER Review + Giveaway! A Musical Thrill Ride firing on all cylinders!”