Spider-Man Homecoming is the most recent reboot of the webslinger to date, after Sony decided to partner with Marvel Studios after their second reboot failed to please the masses. This time, we have Tom Holland playing the role of Spider-Man, known for his role in The Impossible as well as his brief cameo in Captain America: Civil War alongside Marisa Tomei as Aunt May, who seems to follow the trend of Aunt May getting younger by the reboot. Michael Keaton, known for his iconic role as Batman is playing the main villain of the film named the Vulture who first appeared in The Amazing Spider-Man #2 in May 1963, as quite a different character than who you will see in the

This film has not had the best marketing campaign, with disappointing posters and trailers, and with Spider-Man fans being furious that Robert Downey Jr’s Iron Man was a main focal point of the marketing campaign. With Sony’s involvement causing distrust after The Amazing Spider Man franchise and with the disappointing marketing, Spider-Man Homecoming seemed like somewhat of a lost cause, however I can happily say that in my opinion, I was able to sit in a theatre in Spider-Man’s hometown, New York and watch the best Spider-Man and Marvel Cinematic Universe film yet.

Spider-Man Homecoming’s main story takes place a few months after the events of Captain America: Civil War, where after fighting with/against the Avengers, Tom Holland’s Peter Parker wants to prove that he can be an Avenger to Tony Stark whilst balancing his social and academic life on the side, meanwhile Michael Keaton’s Vulture and his team want to destroy Stark Industries/Tony Stark for the trouble he has caused them. When the Vulture becomes a threat, Peter sees this as an opportunity to prove that he can handle big threats like the Avengers handle. 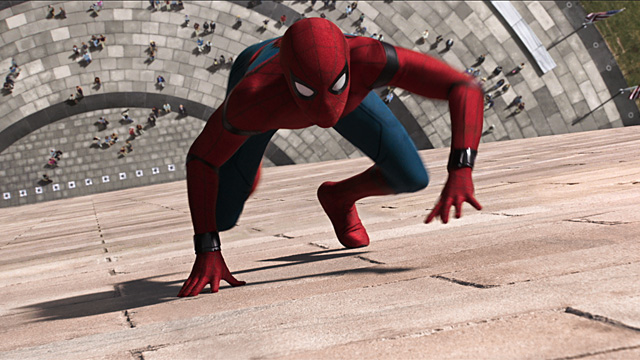 Laura Harrier’s Liz Allen is Peter Parker’s love interest in the film, however, she is definitely her own character, she has her own moments to shine, she isn’t as big of a focus point as Gwen Stacy and Mary Jane were in past films, however that doesn’t make her character bad at all, her character has a lot of shining moments and Laura Harrier does a really good job not only being a love interest but making Liz Allen her own character.

Jacob Batalon’s Ned Leeds is the down-to-earth comic relief, if you have seen the trailers you’ll obviously know what he discovers and when he finds out, his immendiate reaction as well as his reactions to everything Peter does is not only hilarious, but it’s cleverly done in a manner where it is very down to earth. However he isn’t just the ‘comic relief’, he has his own moments to shine and is really an impressive supporting character that everyone should be excited to see as many times he can steal the scene he is in.

Robert Downey Jr’s Iron Man also makes a cameo in this film, and you can thankfully delete your Iron Man 4 jokes from your Twitter Drafts because although he is a presence throughout the film, in reality, he is only in the film for approximately 10 minutes, and as per usual, Robert Downey Jr nails the role of Tony Stark and you’ll be pleased that he only is in the film for a small amount of time, because his minor presence leads to a lot of brilliant growth for Peter Parker.

Michael Keaton’s Vulture is my new favourite Marvel Cinematic Universe film villian, not only is he menacing as a villain, but he is the brilliant foe to go against Peter Parker given the plot, Peter is dealing with a man that has been negatively affected by the careless actions of Tony’s actions showing that Peter has to be responsible with his actions to be Spider-Man. In a story like this, it could have been easy for Jon Watts to decide to sideline Vulture in order to strengthen Peter’s story, however instead, Jon Watts managed to a powerful villain both physically and emotionally towards Peter Parker, with an powerful movitation behind him and leaving a true message to Peter, he succeeds perfectly in almost every way of being a fantastic villain, as well as Michael Keaton providing an amazing performance for Adrian Toomes.

As for the smaller supporting characters, Marisa Tomei’s Aunt May has some really great and emotional moments as Aunt May however unfortunately I feel she could have been used much more than she actually was, she had a decent presence in the film but in my opinion, she should have had much more screen time and it’s a really shame she didn’t get that. Zendaya’s Michelle was a really good character, Zendaya really was impressive considering her acting background isn’t that impressive, however I do not want to say much about her character just to avoid talking about any spoilers. Tony Revolori’s Flash Thompson is a large departure from his comic counterpart but at the same time, he still is in a way ‘Peter’s bully’ however it is handled in a much different and more modern way that it’s much more inventive and interesting which benefits a lot from Tony Revolori’s acting because his acting in the film is incredible, most will love this interpretation of the character, but there will be quite an handful of people who won’t like this interpretation of Flash Thompson.

Vulture’s crew have a lot of scattered shining moments, they didn’t have really much time to become fully developed characters but you’ll see a few of them pop up again definitely, especially Donald Glover’s character who most will be pleased about who he is playing. Jon Favreau’s Happy Hogan is barely in the film however it is great to see him back in the Marvel Cinematic Universe and would love to see more of him again.

The cinematography and CGI in the film is quite great, the CGI has been touched up well after the first look at the film, and now there really isn’t a scene in the film that had noticeable bad CGI, same with cinematography, it is one of the better Marvel Cinematic Universe films cinematography-wise and has a handful of really amazing shots. As for the score, a handful of the tracks are really impressive however a lot of the tracks are also pretty bland which is disappointing but at least there is some impressive tracks to listen to.

Overall Spider-Man Homecoming is my brand new favourite Marvel film excluding Logan, it has spectacular acting, the screenplay is incredible, the villian is the best in the Marvel Cinematic Universe, the character development is great and we can now welcome to the Marvel Cinematic Universe, the best live action version of Spider-Man and Peter Parker.

Spider Man Homecoming, directed by Jon Watts, and starring Tom Holland in the titular role will release in the US on July 7th. Thrilled by his experience with the Avengers, young Peter Parker returns home to live with his Aunt May. Under the watchful eye of mentor Tony Stark, Parker starts to embrace his newfound identity as Spider-Man. He also tries to return to his normal daily routine — distracted by thoughts of proving himself to be more than just a friendly neighborhood superhero. Peter must soon put his powers to the test when the evil Vulture emerges to threaten everything that he holds dear.