Do you still have goosebumps from last night? After seven years, we finally got to see Ice and Fire meet and it did not disappoint. 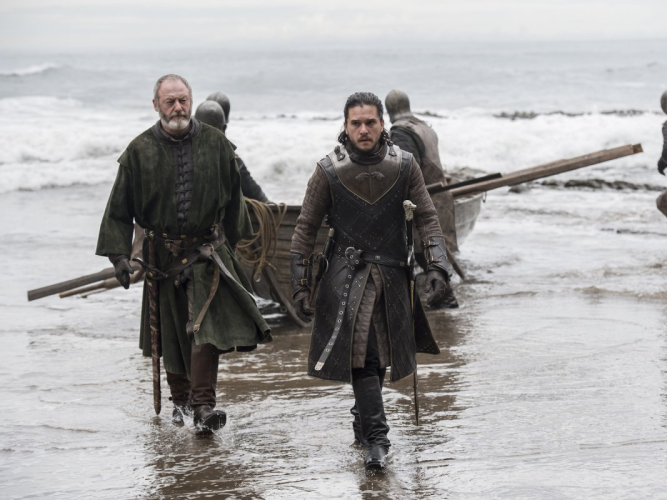 We start off with Dragonstone, the episode opened with Jon, Davos, and their party sail into Dragonstone. They are met by Daenerys’s greeting party led by Tyrion and Missandei. This allows Jon and Tyrion to make each other’s acquaintance for the first time since back in Season 1. They start off with calling each other their nicknames they used to have “The bastard of Winterfell” and “The dwarf of castle rock.” That’s when Jon was just a lowly member of the Night’s Watch, and Tyrion visited the Wall so he could live out one of his dreams by peeing off the top (those were simpler times). “It’s been a long road but we’re both still here,” Tyrion says. Their conversation is interrupted by Rhaegar, Viserys and Drogon. John and Davos being shocked obviously, I mean who wouldn’t be? “I’d say you get used to them but you never really do,” Tyrion says.
While John walks towards the throne room, Varys asks Melisandre why she hides from Jon; she admits they parted on bad terms due to her mistakes (few might be underestimating it a little). She plans to return to Volantis, and Varys urges her to stay overseas forever, but she says she will come back to Westeros one last time and predicts that both of them will die in Westeros.We then finally get the moment every fan has been waiting so long for since season one.
Davos and Jon share a glance before Davos chimes in: “This is Jon Snow … he’s King in the North.” It’s a moment you can’t help but laugh. Naturally, it wasn’t a straightforward conversation between Ice and Fire. Jon desperately tried to convince Dany to put her claim to the Iron Throne on hold and join forces to fight the Night King, while Dany tried to get him to recognize her claim as the true one. Emilia Clarke and Kit Harrington are often criticized for being stilted as actors, yet that awkwardness played well here. Dany is still feeling her way into governance and Jon has had leadership thrust upon him; their fumbling attempts to make their cases rang true. Daenerys cuts the audience short to receive news from Varys that Euron has defeated Yara. Jon is forced to remain at Dragonstone, a prisoner in all but name. Tyrion discourages Daenerys’s desire to burn Euron’s ships with her dragons, which would require her to accompany them and says it only takes one arrow to kill her.
Jon and Tyrion get more time to catch up when they go separately to the designated brooding corner of Dragonstone. Tyrion is brooding because he didn’t see the Euron Greyjoy’s surprise attack coming; Jon is brooding because Daenerys doesn’t believe him and he seemingly came all this way for nothing. Tyron responds to John brooding with “you make me feel like I’m failing at brooding,”  before telling him that he actually believes Jon about the White Walkers. That doesn’t mean it will be easy to convince other people, whose minds can handle the idea of a problem like Cersei (a familiar monster) but not one like an army of the dead.

Tyrion expertly finds a middle ground, though — he convinces Jon that Daenerys is on the side of good and that it’s unreasonable to expect her to commit to fighting an enemy she hasn’t seen as explained by a man she doesn’t know. So what’s something reasonable he can help Jon with? And that would be the dragon-glass buried beneath Dragonstone. Dany can barely be bothered with this, but Tyrion says this dragon-glass can apparently kill White Walkers or something like that. Dany’s more interested in whether Tyrion himself believes in the White Walkers and he drops an ancient piece of wisdom — a wise man once said you should never believe something just because you want to believe it. Daenerys busts him: “Are you trying to present your own statements as ancient wisdom?” Tyrion convinces her that she has nothing to lose by giving Jon the dragonglass Dany wants to know about the whole “knife in the heart” thing Davos briefly mentioned and Tyrion tries to pass it off as those crazy northerners and their crazy talk (If only that were the case).
Later, when Dany tells Jon she’ll allow him to mine for dragon-glass, the two seem to have found at least a tenuous truce. Jon wonders if this means that Dany believes him about the undead, but he gets vague responds which don’t say if she believes him or not.
In the Narrow Sea
After the ending of last weeks episode, one of the few remaining ships of Yara Greyjoy’s fleet fishes Theon Greyjoy aboard. The Ironborn disbelieve his claim that he tried to rescue Yara from Euron because he wouldn’t be there if he did. Euron Greyjoy parades his captives Ellaria Sand, Tyene Sand, and Yara Greyjoy through abusive crowds in the streets of King’s Landing. He presents the Sands as his gift to Cersei Lannister, who accepts his military alliance and promises marriage when the war is won. Euron like the bastard he asks Jamie how Cersei likes it in bed, safe to say Jamie did not take that well. In a dungeon, Cersei kisses Tyene with the same poison Ellaria used to kill Myrcella (poetic justice you could say). Ellaria will be forced to watch her daughter die, and will be kept alive to watch the corpse decompose. this scene gave me chills and is a reminder that you do better not mess with Cerise.
Later that day Cersei has sex with Jamie and, reveling in her authority, flaunts their intimacy in view of the servants, Disquesting I know. Tycho Nestoris of the Iron Bank comes to collect repayment of the Lannisters’ loans. Cersei denigrates Daenerys as a possible investment and secures a fortnight to fulfill their request. 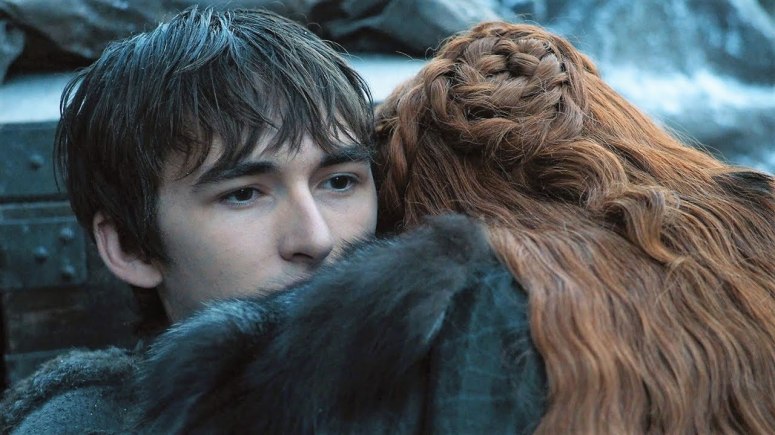 Sansa Stark competently manages Winterfell, preparing it as an emergency refuge for all Northerners. Littlefinger gives an inspiring speech about “fight every battle” mentally, thus never be unprepared. That statement essentially sums up littlefinger. Then we got a stark reunion with Bran Stark and Meera Reed arriving at Winterfell. Sansa, when she sees Bran, jumps to him and hugs Bran, she won’t let go of him and who can blame her this is the first time she has seen her little brother since season one.
In the Godswood, Sansa is confused by Bran’s revelation that he is the Three-Eyed Raven. He also says that he needs to talk with John (think we all know why) Brann then goes on about Sansa specific knowledge of Sansa suffering and Sansa is troubled by it and goes inside while Brann stays there for a little longer. 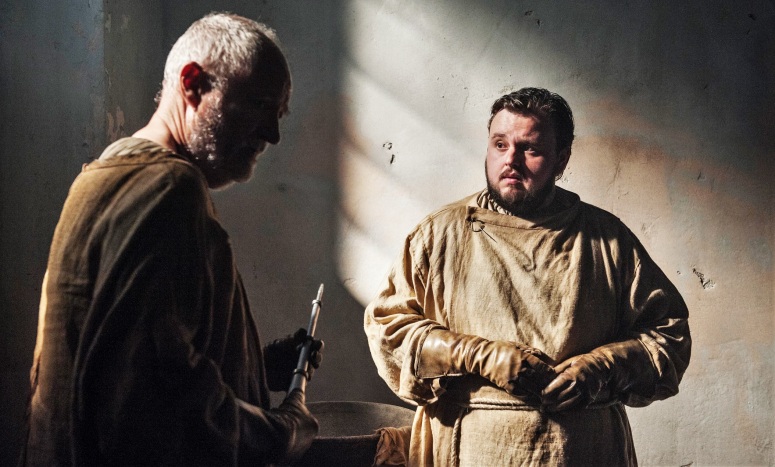 Archmaester Ebrose proclaims Jorah Mormont healed of greyscale and releases him. Jorah plans to return to Daenerys. Samwell Tarly admits that he administered the forbidden treatment; Ebrose praises his skill but punishes his disobedience with an assignment to copy a large number of old documents. Ebrose says that Samwell reward for saving someone who couldn’t be saved is not getting suspended for breaking the rules. Samwell and Jorah parts off, I loved those two characters interactions.

The Unsullied infiltrate Casterly Rock via its sewers, which Tyrion designed. They capture the castle, finding far fewer defenders than expected. While the unsullied is getting Casterly Rock, The Iron Fleet destroys Daenerys’s ships, stranding Grey Worm and his army. Guess that didn’t go according to plan for Greyworm. 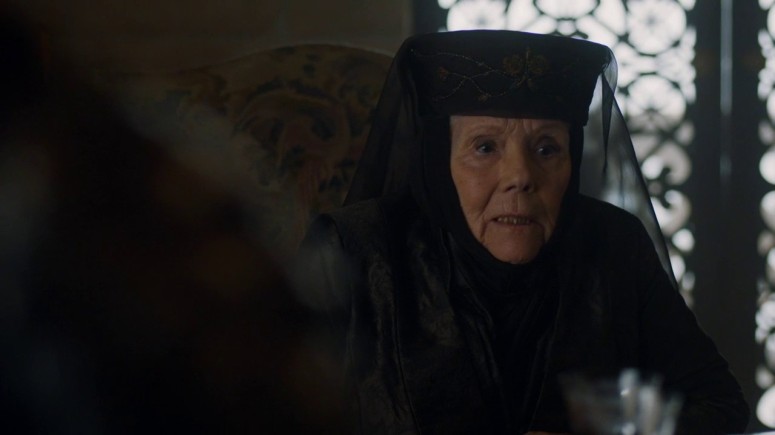 Jaime Lannister, Randyll Tarly, and their armies take Highgarden, having abandoned Casterly Rock to trick Daenerys into committing her Unsullied forces at a strategically useless position. Jaime grants Olenna Tyrell the mercy of suicide over Cersei’s original plans to execute her, Jamie being a good man after all. Olenna drinks the poisoned wine without hesitating after finding out it’s painless.  Olenna after drinking it confesses to murdering Joffrey and asks Jaime to tell Cersei which probably makes Jamie regret his decision of showing her mercy. Jaime leaves Olenna to die alone and getting the last laugh.

Overal this episode was great and did not disappoint at all. It had enough action and the way they handled John and Daenerys was great. The dialogue, characters, and pacing of this episode were fantastic. .