Tom King and Mitch Gerads’ first issue in their Mister Miracle miniseries is not one to be forgotten. The series focuses on Mister Miracle (Scott Free) at a painful and scary point in his life, examining his mental state. The superhero’s ability is he can escape anything and it quickly becomes clear that King will twist that for the story.

The series is in the same vein as King’s The Vision (2015-2016), King provides a fresh look at a minor character, examining his private life through a dark lens. The opening scene sets the stage for a grim story, that only gets darker as the pages turn. King demonstrates Scott’s pain through the narration and interactions with characters. King had previously mentioned that this series is in response to the restlessness, confusion, and pain of our world and it is evident he is projecting both his and our worries onto Scott. Packed with symbolism and larger-than-life dialogue and narration, it is evident this story is meant to be taken at much more than just face-value.

Mitch Gerads is perfect on art, pencilling, inking, and coloring. His style is thematically important, with an unfinished look reflecting Scott’s mental state. The pencil work employs few straight lines or perfections. Every panel appears almost as if it isn’t professionally done but it is obvious it has a purpose. And when straight lines are used, they’re often out of place. 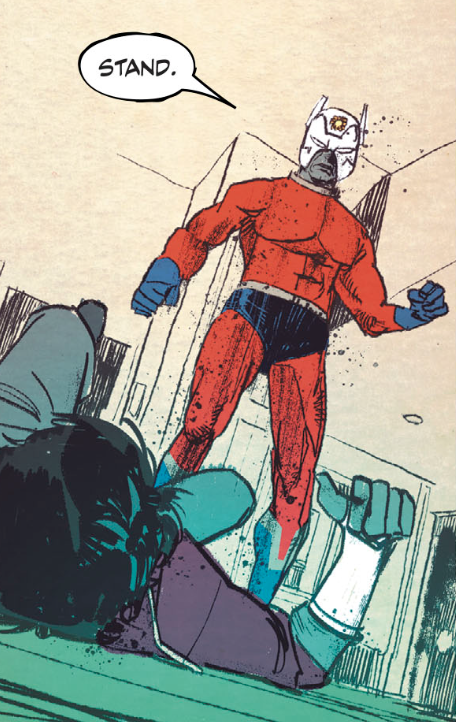 Gerads’ inking is very important, leaving space open within each shape to hold as much color as possible without distracting or detracting.  Only key points are shaded, so when shading is present, it becomes apparent it is important.

The backgrounds often remain uncolored and dull for the neons on costumes to stick out. Gerads employs techniques that make the comic feel older. Most notably, the use of Ben-Day dots, harkens back to the age of writers and artists such as Jack Kirby, the creator of Mister Miracle and his cohorts. The dots are not always used, instead combining with modern color printing, make the comic feel not completely old and not completely new: a sort of limbo. This works incredibly well with the story, reflecting themes King employs in his writing.

King and Gerads are taking us in a new and interesting direction. With little action, this story relies heavily on philosophy and its hidden meaning. But as Mister Miracle is dragged back into conflict, action is sure to be present in upcoming issues.