Ranging in powerful emotions from pain to pride, STEP showcases the spectacular true story of young Baltimore high school girls balancing college applications, their school step team, and challenges of lower-income Baltimore life. But where STEP hits it out of the park with heart, it falters with less focus on choreography, performance, or teamwork.

STEP holds strong as a feel-good movie. When difficulties arise and tensions mount, the contrast between good and bad situations becomes much clearer and brings on chills. As a documentary, the movie’s camera doesn’t shy away from featuring the young girls and their families’ responses to adversity. 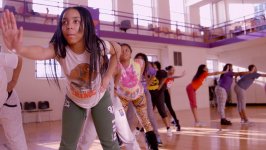 Baltimore serves as an important setting for STEP, as it isn’t just a backdrop. The city is interacted with in the movie and has thematically important relevance. The relation to Freddie Gray and the riots in the April of 2015 is necessary to the film and is well-used.

The camerawork is phenomenal, reflecting the tone. Dynamic movement pairs with the girls’ rehearsal and long static shots display their distresses and the intimate relationships within the team and their families. When showing the final performances, however, the movie cuts often between shots as if trying to show off all the great angles they captured instead of showing the incredible team’s hard work pay off in a chillingly well-choreographed and executed number. And as a movie about a step team, not as much time is devoted to the rehearsing as would be expected. Instead, the bonds within families is well presented while the bond within the team leaves some to be desired. The movie makes it evident that the bonds exist but when rifts form, resolution feels absent. 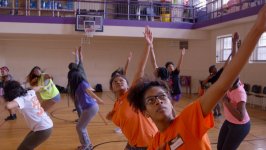 The soundtrack is flawlessly used, pairing with the funny moments, the hurtful moments, and the heartwarming moments. Ranging from tension to camaraderie, the music accentuates every scene. Its presence is used when needed and absent when not.

STEP is an emotional experience; watching the girls rise and fall will move you to tears. The movie brings on both clapping and crying, especially with a memorably good ending.

STEP is currently in theaters

STEP documents the senior year of a girls’ high-school step dance team against the background of inner-city Baltimore. As each one tries to become the first in their families to attend college, the girls strive to make their dancing a success against the backdrop of social unrest in the troubled city.