At AwesomeCon, Stephen Amell was on a panel and said he would not want the Joker brought on as a villain for Arrow but would like to see Batman join.

Mae Abdulbaki was at the convention over the weekend and shared a few tweets describing Amell’s interest:

Stephen would like Bruce Wayne to be the villain. "Everyone is the hero of their own story" and Oliver is hero of #Arrow. Thinks he and Bruce would argue over how to do things. #AwesomeCon

Stephen thinks if they brought on the Joker it would be too on the nose. #Arrow #AwesomeCon

Bruce Wayne has been mentioned before in the Arrowverse, most notably in this scene, the season 6 premiere of Arrow:

Mayor by day. Hero by night. Stream the #Arrow premiere before tomorrow's new episode on The CW: https://t.co/zCi32rKGdv pic.twitter.com/2cEQUQbTFk

Amell had been the reason for the name-drop in that episode and has had pull in creative choices for the series. It is possible he may be able to get Batman for a later season. There had also been rumors (turned out to not be true) that Damian Wayne, the current Robin, would be the villain for one of the past seasons. Superman has also guest-starred in Supergirl, an Arrowverse show, played by Tyler Hoechlin: 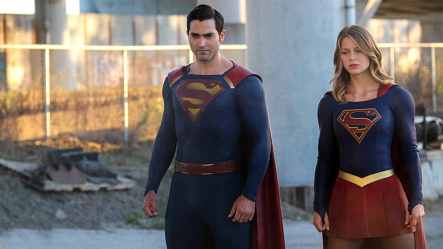 While the Arrowverse usually sticks to slightly more minor-league heroes, the appearance of Superman makes Batman’s likelihood of appearing greater.

There have been other mentionings, but they were more indirect hints at the character, such as Vandal Savage saying, “I have seen dark knights fall in season one of Legends of Tomorrow.

What do you think? Would you like to see Batman appear in Arrow as a villain, someone who morally disagrees with Oliver? Let us know on Twitter!

Arrow airs on the CW at Thursdays at 9 PM EST.

Arrow– When presumed-dead billionaire playboy Oliver Queen returns home to Starling City after five years stranded on a remote island in the Pacific, he hides the ways the experience has changed him. As he reconnects with those closest to him, including his sister, Thea, Oliver appears to be the same wealthy, carefree bachelor they’ve always known. At night, flanked by his devoted friend, Diggle, Oliver uses his secret persona — that of a vigilante — to right societal wrongs and transform the city to its former glory.