The DCU has kind of been the silent bomb waiting to find its moment to detonate. It’s kind of all over the place as a story, but it’s come together in the messiest of ways. I love the DCU. There will always be chinks in the armor, but those all have easy fixes. We know that movies usually don’t follow books, and that definitely goes for comics. The thing is, the movies usually create their own universe. They create something else that fans can resonate with. While the DCU does have its flaws, we haven’t seen it the way it was intended to be seen.

On Twitter Saturday night Jay Olivia, a DC Animated director that has worked on several comic book films responded to a fan’s tweet about the DCU. He stated that:

“Man of Steel was never meant to have a sequel because it was supposed to be chapter 1 of a 5 chapter story. Notice how BvS follows exactly after MoS? It’s like book two of Harry Potter.” 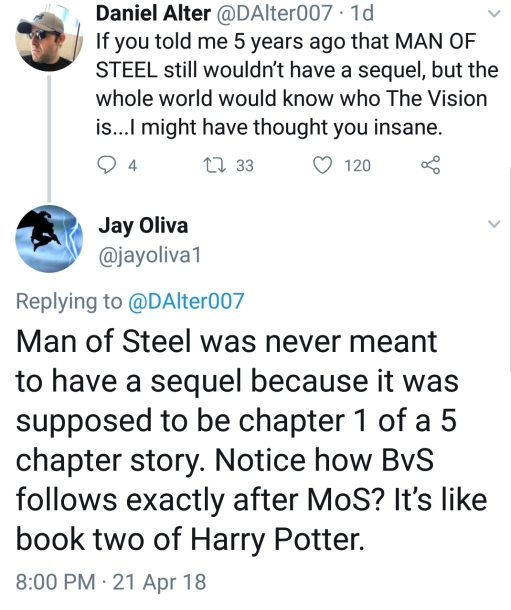 This would have been an interesting story arc. We don’t exactly know the order to JL2 and the unnamed film, but I’m sure there was something good there. My best guess is Man of Steel, BvS, JL, Suicide Squad/Flashpoint/, and JL2 was the finale. I’m also curious as to what characters would have been added had the films progressed. Snyder and Chris Terrio clearly had a vision as to what they wanted to see in the film. We’ve been seeing Zack Snyder talk about symbolism in his DCU films a lot via Vero lately.

We have heard talk of a Man of Steel sequel recently, the film will most likely be titled something else since Zack Snyder is no longer attached to the films. They have to attach a director to the film as well. WB has scrapped a few projects but kept films like Shazam!, Black Adam, and Aquaman alive. We also know that there will be a Birds of Prey film going into production soon. There was clearly something else bigger in store if Snyder would’ve gotten his way.

It was originally thought there was going to be a Man of Steel sequel but the film didn’t perform as well as expected so after scrapping that, they went with Batman V. Superman. With this new info, it seems like that wasn’t the case.  Despite the downfalls it had at the box office, Snyder had always meant for the film to precede Batman v. Superman. He was the engineer behind the machine, even if not everyone saw it the same way he did. He helped build something that had so much potential. Justice League 2 won’t happen any time soon too, at least in the way Snyder had proposed.

What do you guys think? Do you think if Zack Snyder would’ve had full creative freedom if his films would’ve done better? Tweet us your thoughts @SuperBroMovies!