It’s been a bumpy road but the final to The Flash‘s Season 4 is finally here. It’s time for the final showdown between The Thinker, Mechanic and Team Flash.  A lot happens in this episode that’ll surprise some and perhaps fit into your fan theory, let’s break it all down.

After the cliffhanger from the previous episode, this one starts with a bang as DeVoe is initiating the enlightenment using very large satellites in orbit. He’s predicted everything, even a neat color scheme of evil and purple. As the clock runs down literally, Team Flash scrambles to find a solution to take down DeVoe with the help of his wife. They figure that Barry has to transfer his consciousness to DeVoe’s, and of course, Cecile’s weird pregnancy powers come to use as she’s the only person able to do such thing. It’s strange they decided to go this route with the character but at this point, there was too much emphasis throughout the Season on her to do nothing.

As Barry enters DeVoe’s mind, he’s searching for something/somewhere in it that can allow him to pull the good out of DeVoe so, you know, everyone doesn’t turn into babies. When they have trouble locating it, Harrison Wells, who’s almost completely gone, using the thinking cap one last time to figure it out. Tom Cavanagh does a great job showing the pain he’s going through as he loses all of his intelligence. Opposite of the last episode, it’s used to evoke deep emotion rather than just laughter. His final act with the last bit of juice from the cap is to hug Cisco, the moment is fantastic is definitely helped create emotional investment into the show.

Something major that happens is the return of Ralph Dibny, who’s been stuck in DeVoe’s weird and dark mind. Together they start to investigate where they could find the humanity within The Thinker. Everything escalates fast when he appears in S.T.A.R. Labs, where he goes off again on how he thought of everything, which to be honest is just used as a lazy plot device. The Mechanic transports the gang to his lair, a place where she’s very capable of using for herself. Back into Thinker’s head, Barry and Ralph fight an onslaught of DeVoes each more dreary than the next. In a Matrix-style fight (but less inventive), they have to go through all of them in order to have Dibny take control of his body.  While this is happening The Thinker fights and takes out each Team Flash member until only Cecile is left. Showing he’s pretty much all out of the goodness in him, he attempts to kill the pregnant woman.

He fails when Ralph and Barry make it out, allowing the former to regain control of his body. Finally, the Thinker is done. The whole “Inception” sequence was built up at all in this season so the whole idea seems last second on the writers’ part, but it was mildly entertaining. Although DeVoe is done for, the massive satellite is now crashing into earth directly on Central City. The last major battle of the episode is against large chunks of debris, it’s as exciting as it gets. In all seriousness, the scene itself is pretty entertaining, especially when Barry decides to punch the biggest piece out of the sky. Ignoring the fact Barry Allen isn’t smart for a second, when time seemed to rewind and then play again and then the mystery speedster shows up to help, it’s a pretty great moment that leads into the big reveal.

Before that we get an emotional goodbye for Harrison Wells as he’s able to get his mind back, we’ll sort of. The parts that count anyways, it was pretty sad to see Cisco realize Wells will never be same again in terms of being his mentor of sorts.  Tom Cavanagh does a great job of portraying him as someone who so desperately wanted to be at peace and only found it when he truly realizes he didn’t need to be the most intelligent man to do so. I don’t think he ’ll be back for next season simply because it’s about time the cast gets a bit smaller, but I wouldn’t be too surprised if he makes a small appearance or two. 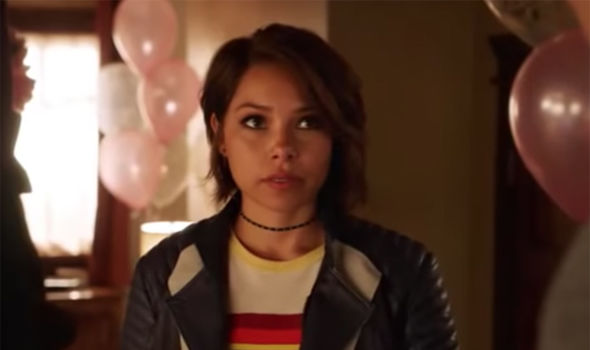 The big reveal and set up for next season is the final appearance of the “mystery girl,” who’s been in and out of the show for a while. In the closing minutes, she reveals her identity to everyone as the daughter of Barry and Iris, Nora West. Her name is a slight departure from the comics but, Nora is Barry’s mother’s name so it’s certainly not far-fetched. The reveal is ultimately very much what almost every fan expected, another season where they go the super-safe route with their reveals. It gets you thinking if they are going to make it so obvious why not just reveal to the audience early on.

It’s a messy episode for sure, but I think it does a fine job making an entertaining and suspenseful finale. The conclusion to DeVoe’s story isn’t nowhere near as impactful as it should’ve been, despite the neat Matrix-style action within his mind. Harrison Wells arc is now complete, and it’ll sure have some fans wondering if he’s coming back. The best part of the episode is certainly how it sets up next season with Nora Allen. She certainly messed something up when she helped Barry destroy the satellite, and I’m actually kind of excited to see how they pull that off. The season is finally over, I can only hope the showrunners will learn from their mistakes and not make a short story stretched out into 23 episodes, with only a very small portion of them being memorable.

What did you think of the Season 4 finale? Be sure to tweet at SuperBroMovies with your thoughts. – Marcos Melendez