So, you’ve graduated. You’re onto the next great phase of life. Maybe this is a beginning, maybe it’s an end, and maybe you aren’t sure which it is yet. As the summer sets in and you have time to contemplate what you’ve left behind, you might as well use some of that time to watch movies. And we’ve got just the ones to match your mood. Can’t Hardly Wait (1998)

What it’s about: Taking place almost entirely over the course of one night, six high school graduates try to wrap up the loose ends of their high school careers at a massive, one-last-hurrah style party.

What makes it perfect for graduates: Any high school student about to graduate has been told this by someone older: “College is so much better”. If you’ve ever heard something along the lines of what comes after high school placing it in a whole new, less important context, this is the movie for you. It perfectly captures the feeling of leaving behind some people you’ll miss, and some you’re glad you never have to see again. What makes Can’t Hardly Wait unique, besides its dated 90’s charm, is its more fun approach to an event that could have focused on the angst instead. And what makes it brilliant is its deconstruction of high school stereotypes. It sets up six different characters, each fitting more or less into a label they conformed to in high school. Where the movie succeeds is showing how those labels don’t hold up once the tassels have been turned. All that lame social pressure that was once so defining simply doesn’t exist anymore. Can’t Hardly Wait is what happens when students are suddenly young adults presented with the prospect of making their own life choices.

What it’s about: A year in the life of high school senior Christine “Lady Bird” McPherson, who shares a turbulent relationship with her mother.

What makes it perfect for graduates: A mark of adolescence, in general, is the search for self. Self-identity, self-worth, self-love, and the battle between selflessness and selfishness. It’s not an easy struggle to deal with or define, and it so often conflicts with other people in the same search. Lady Bird captures this perfectly and wraps it in one of the most realistic depictions of being a teenager ever put to film. Anyone who went through high school will find things to relate to, be it relationships, break-ups, fighting with parents, or just trying to get people to like you. I can personally attest to the real-life accuracy of the pain that is the college application process as Lady Bird went through. Just as important as feeling understood, Lady Bird shows you new perspectives as well, and its lessons are valuable tools for those going into the larger world. 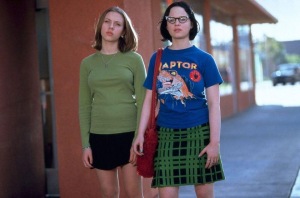 What it’s about: Based on the 1997 graphic novel of the same name, Ghost World follows two girls who just graduated and don’t really have anything to do. They end up befriending Seymour, a lonely older man, as they figure out just where they’re going to go next.

What makes it perfect for graduates: Remember how I said Can’t Hardly Wait was the fun post-graduation movie? Ghost World is the more melancholy side of that. This is the movie for anyone who sees the time after graduation as a big blank page, unsure how you’re now supposed to fill your time but moving on anyways. Enid, the main character, is glad to leave high school behind but isn’t ready to make any new commitments. Reflecting how early adulthood can leave one feeling lost and the strain that can put on relationships, Ghost World is the perfect black comedy for those who meet graduation with a shrug.

What it’s about: In this underrated prequel to Monsters Inc., Mike Wazowski fulfills his life-long dream when he enrolls at Monsters University as a part of their prestigious Scare program. He faces unexpected competition when he meets James P. Sullivan, as circumstances force them to work together for their goals.

What makes it perfect for graduates: This probably isn’t the first example that pops into your head when you think about coming-of-age movies, but it’s absolutely essential viewing for anyone about to go to college. Let me hit you up with some stats: nearly one-third of college students who choose a major in their first year will change it sometime in the next three. While some may not be sure of their future, this is the movie for those obnoxiously put-together people that had their whole lives figured out at the beginning of senior year. It’s nice to have a plan, but that plan almost never goes the way we want it to. Despite having a hard-set plan and putting all the work in, Mike’s life ends up the polar opposite of what he always dreamed. But Monsters University doesn’t just dash your hopeful college dreams. It also serves as a reminder that even when things don’t work out how you wanted, they always work out for the best, a lesson every adolescent should keep in mind.

What it’s about: Popular high school senior and master slacker Ferris Bueller takes his girlfriend and the over-stressed best friend out for a skip day, as his principal tries to catch them in the act.

What makes it perfect or graduates: High school graduates know the feeling of senioritis all too well. By the first day of senior year, you’re checked out, and the rest of the year is an exercise is how little you can care while still achieving acceptable results. But senior year is also a celebration, as everyone acknowledges the end of an era in your young life, and that makes it the most fun as well. No movie has ever captured these feelings so well as this iconic John Hughes classic. Ferris Bueller acknowledges the stress that can come with being young- especially the weight of parental expectations. And it treats that with appropriate weight. But it’s really a love letter to the senior skip day, a reminder that everyone needs to cut loose and just not worry once in a while. Kids should be kids and live a little while they’re young- as long as they’re home before their parents notice. And enjoy that time while you can, because college students will tell you- “senioritis” only gets much worse in college.

What it’s about: Almost Famous is the story of 15-year-old high school senior William, who gets the opportunity to write for Rolling Stone magazine. He follows rock band Stillwater on their 1973 Almost Famous tour, learning about life and love along the way.

What makes it perfect for graduates: Now if you’ve seen the movie, you might be wondering how closely linked it can really be to graduating when the main character misses his own graduation. Well, graduations of any sort are important because they mark a person growing up to some degree of taking on new responsibilities. They symbolize the next level of societal maturity. By pairing a kid who’s already much too young for his grade with adult rock stars, you get two different age groups, each with the opposite levels of maturity someone their age should have. The kid is on his own as a professional journalist, and the adults are all about partying and can’t stop fighting with each other. In every graduating class, it’s easy to identify someone who maybe needed to take a step back and enjoy their youth more, and someone who really needed to grow up and get serious. By the end of Almost Famous, the adults learn to stop acting like kids and the kids learn to stop acting like adults. Finding your balance and rhythm in life is important, and in Almost Famous, you get to watch a whole group of people figures that out together. Plus, it’s a really fun, quotable movie.

What it’s about: Famous for director Richard Linklater’s technique of filming the same actors across a real-time span of 12 years, Boyhood chronicles the life of a kid named Mason as he goes through his different stages of life.

What makes it perfect for graduates: Why is a graduation such a significant event anyway? Basically, it acts as a single point marking a significant change in what your life was dedicated to up until then. It’s a reflection of what has come before and what will come afterward. And that is what Boyhood is all about. It captures the way our lives slip away before we can get a hold of them. The little moments that seemed so significant may have ended up not mattering at all, while others may have really meant the world, even when we never thought they would. If you’re graduating, take some time to look back on it all before you move on.

Do you have any recommendations? What’s your top pick movie to watch in your cap and gown? Let us know @SuperBroMovies.