It looks like Doom Patrol has finally cast its villain in the form of Mr. Nobody. The antagonist for the team will be played by Alan Tudyk from Rogue One: A Star Wars Story. The series has nearly cast the rest Doom Patrol so it looks like this will help round out the cast.

Tudyk’s Mr. Nobody will face off against the stars of the series Robotman (Brendan Fraser), Negative Man, Elasti-Woman (April Bowlby) and Crazy Jane (Diane Guerrero). The team will ultimately be brought together by Cyborg played by Jovian Wade. 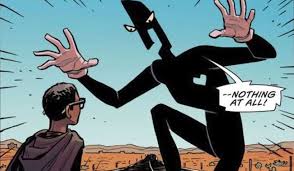 For those unfamiliar with Mr. Nobody, the villain was created after Eric Morden was exposed to unknown experiments by ex-Nazis. Morden found he was now a living shadow able to draw the sanity of others as the insane Mr. Nobody.

It will be interesting to see how Mr. Nobody will look on the screen along with the other stars of the series. As we have seen with Robin and Hawk and Dove on Titans, the DC Universe is capable of making some amazing looks.

For now, though we will have to wait for a look at Tudyk’s Mr. Nobody so stay tuned to SuperBroMovies for any updates.

Are you excited for Tudyk on Doom Patrol? Let us know at SuperBroMovies on Twitter what you think! – Jacob Campbell