Iron Fist season one had a mixed reception at best. Whether it was the focus on the business shenanigans of the Meachums or the perceived miscasting of Finn Jones as Danny Rand, fans had a tough time getting behind the series as much as the other Marvel Netflix series.

Personally, I enjoyed the first season of Iron Fist. It was flawed, sure, but there was a lot to love in terms of mystic lore and fight sequences. With the biggest weakness of season one, showrunner Scott Buck, who you might also remember from ABC’s disastrous Inhumans, replaced by Raven Metzner, I was quite curious to see how season two would shape up.

Now that all episodes of season two are available to stream now on Netflix, the moment of truth is here: is it any good? Well, there’s only one way to find out…

EPISODE 1: “The Fury of Iron Fist” 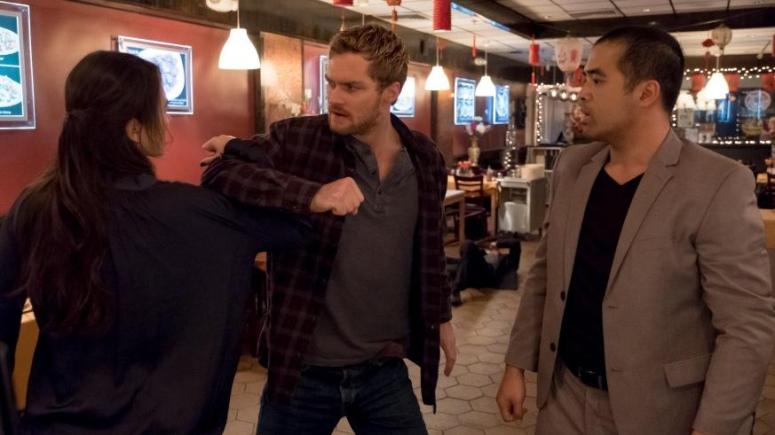 This season certainly isn’t wasting any time. Episode 1 opens with a gang taking control of an armored truck before Danny Rand shows up to the scene, covering his face with a basic, though admittedly cool, new mask. One glow of the fist and a punch to the ground later, the gang members are dispatched.

As we find out as he returns to the closed dojo, where he now lives with Colleen Wing, Danny is fulfilling his promise to Matt Murdock to protect the city, while working a day job as a mover. The city definitely needs defense, as the absence of the Hand has sparked a war between rival gangs in a so-called “Triad War”.

Wing has given up crime fighting to help in her own way by working at the community center in Chinatown. It’s here that Wing discovers something strange: a mysterious box that has her family crest on it, donated by somebody named Frank Choi. This leads Wing to a restaurant owner who denies knowing anything about the box.

Later on, Danny takes Colleen to the restaurant for a “date night”, but the two end up in the middle of a fight between two rival gang factions in the episode’s standout sequence, where Jessica Henwick seriously pulls her weight in a slick, well-choreographed kitchen fight that rivals even the best moments of season 1. Colleen laments that she’s back in the fight whether she wants to be or not- little does she know it’s about to get a whole lot more complicated.

On their walk home from dinner, Danny is attacked by none other than Davos. It’s unclear to Danny why Davos is there, but he reminds Danny that he’s unworthy to wield the Iron Fist before disappearing into the night.

Little does Danny know, Davos is planning something sinister. He’s already met with Mr. Yang, the leader of Triad organization The Hatchets, regarding an unknown shipment, while also being in league with Joy Meachum, whose managed to have been bought out of her shares in the company by Rand. She seems to feel some guilt over the decision, so it’s unclear where her allegiances will lie going forward.

Speaking of the Meachums, Ward is back and finally dealing with his drug issues- kind of. He mostly just seems to go to his Narcotics Anonymous meetings to have sex with his sponsor, but for him, this is progress.

The last thing to discuss with the episode is the introduction of Mary, aka Typhoid Mary, played by Alice Eve. It’s a brief meeting, with Danny running into her as she takes pictures around New York, but she has a creepy demeanor that suggests something more sinister underneath.

So, how does “The Fury of Iron Fist” fare? It’s hard to tell, at least for now. The performances across the board are fantastic; Finn Jones just seems to be getting better and better with each Marvel Netflix appearance and Jessica Henwick is always a delight as Colleen Wing.

Yet, while the direction by David Dobkins is assured, this episode feels a bit all over the place. Even typing this recap is exhausting because there’s just so many plot threads and, until I get a sense of how these story lines are connected, it’s quite overwhelming. A lot of conflicts are at play, which isn’t a bad thing, but you practically need a detailed chart to figure out exactly what’s going on.

Still, what matters is that I’m intrigued to see what happens next. The pieces are in place, let’s see what the show does with them.

EPISODE 2: “The City’s Not Burning”

Now that the pieces are in place, “The City’s Not For Burning” takes them and runs with them.

The Triad War storyline gets the most screentime this time around. We open with the brutal assassination of a member of the Golden Tigers by the Hatchets, leading to Danny discovering the body on the street. Clearly, Danny is not going to take this lying down as he approaches Mr. Yang to discuss a truce. During this meeting, Yang reveals that one of the men killed guarding the armored truck at the beginning of episode 1 was his son, and after Danny loses his temper and activates the Iron Fist, the meeting is adjourned.

It’s relieving to see everything begin to tie together, after the last episode threatened to collapse under the weight of its many plot threads. We’re starting to get a sense of the personal nature the Triad War has undertaken, which continues in Colleen’s storyline. She is accosted by a young gang and follows them to their hideout. After meeting their equally young leader, Rhyno, she offers them help at the community center.

Danny & Colleen attend a “charity event” at the community center that seems to be more of an excuse to gamble. There, Colleen finds Mrs. Yang, convincing her to make a call to her husband to call a proposed hit at the funeral of the man who was killed in the opening off. However, this victory is short lived, as Davos shows up to Mr. Yang’s office and (supposedly) kills him. 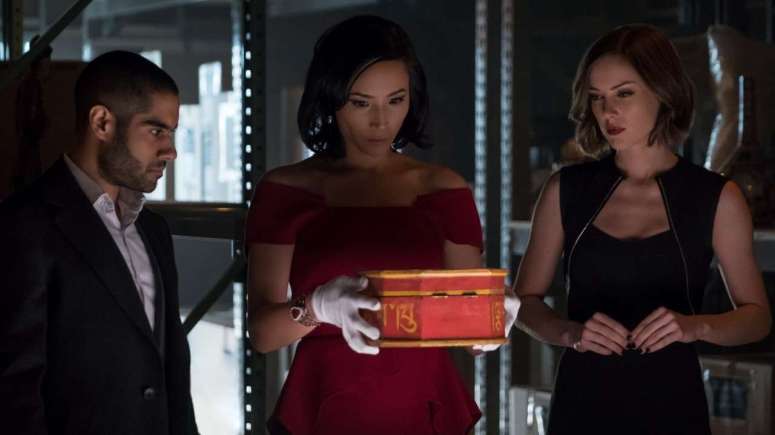 Let’s talk about Davos for a second. He had a hell of an episode, getting not only a flashback to K’un Lun where we see a very visceral battle between him and Danny, but also a great story line with Joy.

We find out from Ward’s investigating earlier this episode that with Joy’s exit from Rand she acquired a load of “junk” patents. He suspects that there’s something more to these patents, so he follows her to an auction she’s attending with Davos. She and Davos are seemingly there to purchase a Bronze Age antiquity from her acquaintance Mika Prada, which really turns out to be a scheme for Davos to seduce the (married) Mika to extort her for a reason we do not yet know.

Then, once again, we come to Typhoid Mary. After having what appears to be a manic episode in the middle of New York earlier in the episode, Danny takes her back to the dojo where she appears to become better. However, later on, she tries to contact Danny unsuccessfully as we see her crumpling a note that an unknown person (maybe herself?) wrote to her with the text: “Stay Away From Danny Rand”.

This ending scene, though admittedly crazy, sours the episode a bit. As someone who’s unfamiliar with her character in the comics, it’s hard to know where they’re going with Mary and her addition her feels like unnecessary bloat.

Otherwise, this was a pretty solid episode! The gang dynamics are getting sorted out in a dynamic, humanizing way that recalls the excellent Luke Cage season 2. There are no real bad guys here, and that moral ambiguity is thrilling.

It’s a bit tough to see where Iron Fist season 2 is going and because of that it’s hard to give it too high of a score, but it must be said that so far season 2 is a marked improvement on season 1. This episode built on the momentum of episode 1 quite well, even without a major fight scene, so if the next episodes keep this ball rolling this could be an excellent season of superhero television.