Todd Phillips’ Joker origin movie has been in full swing as of late with set photos of Joaquin Phoenix as the titular star leaking every other day. Up to this point, we’ve only seen him on set as his “pre-Joker” persona, Arthur Fleck, but the biggest leak has just dropped online. TMZ just unveiled a set video revealing Joaquin Phoenix in full costume and make-up as the Clown Prince Of Crime.

You can find the set video here.

This leak comes in the wake of the official reveal from Warner Brothers of Joaquin Phoenix in Joker makeup for a test screening. Many speculated that the reveal wouldn’t be his final look in the film, but his appearance in this set video more or less resembles the test screening footage.

The video shows the Joker walking in a train station amidst chaos as he pulls off a clown mask to reveal his makeup underneath, which is very reminiscent of Heath Ledger’s first appearance in The Dark Knight. His suit is ripped straight out of the comics with his makeup having a more carnival clown feel, and it is evident he will have the green hair for the role. 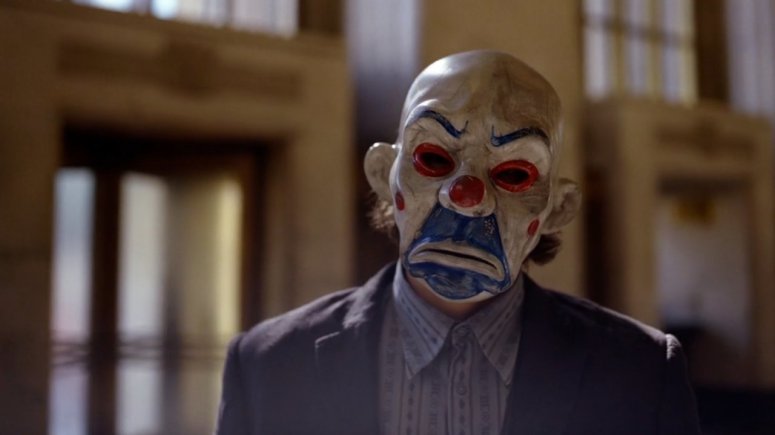 His look as a whole resembles Heath Ledger with the long hair, nice suit, and smeared makeup. The only thing left to see of Joaquin Phoenix’s Joker, other than his performance, is the notorious and unique laugh that comes with each iteration of the character.

What do you think of this first look at the first full look at the Joker on set? Let us know your thoughts on Twitter at SuperBroMovies.

One thought on “BREAKING: Set Video From ‘JOKER’ Reveals Full Look At Joaquin Phoenix As The Clown Prince Of Crime”