Ever since Batman first debuted back in 1939, the character’s rogues gallery has been as responsible for the Dark Knight’s commercial and critical success and prosperity as ole pointy ears himself.

Two-Face. Riddler. Mr. Freeze. Catwoman. Bane. The Penguin. Poison Ivy. These iconic names are as assimilated with our pop culture lexicon as much as Batman, Bruce Wayne, and The Dark Knight are. Without one, the other does not exist, and vice versa.

And of all those iconic names — hero, villain, or otherwise — it can be argued that the most recognizable of them is the Joker — Batman included.

If you are aware of Batman’s existence, you are aware of the Joker’s. Black and white, light and dark, good and evil, etc, etc. Need proof? Ask yourself this: is The Dark Knight — the greatest piece of Batman filmmaking ever made — a Batman movie, or a Joker movie? Exactly.

But while Joker may be just as much of a box-office-slump-buster as Batman, that doesn’t mean the character should be recklessly deployed in the same ways.

What makes Joker so everlasting, so legendary, is his opaqueness, his mystery. It’s his lack of identity that poses the most threatening existential question to Bruce Wayne’s life-defining crusade: can evil ever be stopped if anybody and everybody has it inside of them?

Simply put, regardless of the prestige involved with the film — Todd Phillips, Joaquin Phoenix, Robert De Niro, Marc Maron, and Frances Conroy is an undisputed murder’s row of talent — it’s very existent betrays the fundamental idea of the Joker: that this is a “man” so evil, so lost in insanity, so the moral off-the-grid, that even Batman himself — the world’s greatest detective — can’t figure out who that man is.

In fact, in Endgame — one of the defining Batman stories of the 21st century — there are suggestions that the Joker is not even a “man” at all, but the devil himself.

Ephram Snow, a mentally ill serial killer who killed a group of young girls in Gotham City, actually believed that the Joker was the literal incarnation of the Devil, having come to Earth as “the Pale Man” twenty years prior to convince Snow to commit the murders he had done.

Similarly, Commissioner Jim Gordon — while investigating various mysterious tragedies that have bedeviled Gotham City’s oldest hospital — finds a familiar face lurking in the background of newspaper clippings,  some dating back to the early stages of the 1900’s. 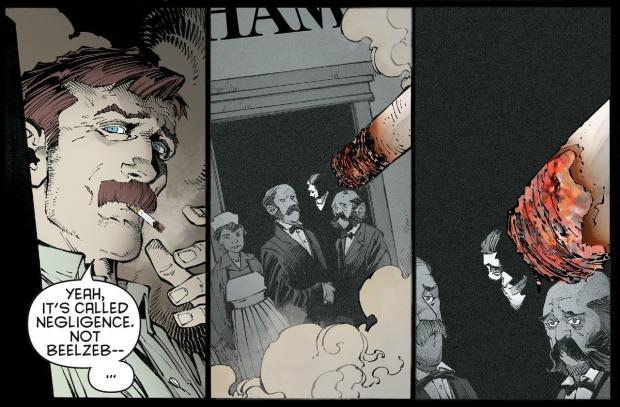 Far more compelling than a recycled out-of-work comedian narrative, no?

And while Endgame may be the first time that the Joker has been presented as an omnipotent, eternal and possibly other-worldly evil, it is far from the only example of the Joker’s origins being essentially unsolvable, as this excerpt Batman: The Man Who Laughs contemplates whether he even knows who he is:

All of this is merely a long-winded way of saying that even the Batman himself cannot figure out the Joker’s origin, and now we’re supposed to believe that Warner Bros. — the guys behind Henry Cavill’s CGI mustache and Steppenwolf’s general being — can? If madness is the emergency exit, then believing in Warner Bros. is the door.

I will see Joker — as will you — and based on everything I’ve seen so far, I’m actually willing to bet it’s going to be one of DC’s strongest efforts yet. But at what cost?

Ironically enough, DC’s calculated gamble with their Joker venture can be best described with a quote about the Clown Prince of Crime himself:

“And in their desperation, they turned to a man they didn’t fully understand.”