Jackson Maine walks out onstage loaded, and wails on his guitar to thousands of adoring fans who just want to see him play the same hit songs that he has been for years. Ally walks down the street in a title card straight out of the golden age, and into an opportunity she never thought she would have. The burnt out star and the starlet on a collision course that will change both of their lives is the oldest story in Hollywood, but you’ve never seen it told like this.

A new star is born in every generation. Janet Gaynor and Frederic March told the oldest story in Hollywood first with the original A Star is Born in the 30’s. Next,  Judy Garland took the reins in the 50’s and showed she us why she was America’s Sweetheart. Then in the 70’s, Barbra Streisand and Kris Kristofferson took the story a different direction and showed what it was like to love a washed up rockstar. After all of these remakes, A Star is Born is a tired story that could’ve done the same thing again. Bradley Cooper could’ve made the same movie that’s been made 3 times before, but he didn’t. Instead, he and Lady Gaga deliver a film that will leave you emotional long after the credits start rolling. 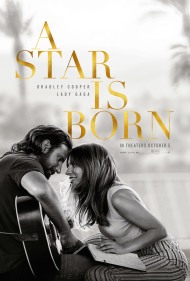 It was Bradley Cooper’s directorial debut, but he delivers a visually stunning film with the confidence and skill of a seasoned filmmaker. From the opening moments where Jackson Maine (Cooper) wails on a Gibson in front of an adoring crowd to the closing moments of the film, Cooper sets the tone for a visually spectacular movie and delivers at every turn. His character is country star Jackson Maine who’s prime is behind him, but he still tours the country playing the same songs night after night. By chance, he happens to meet a beautiful girl named Ally (Gaga) with a beautiful voice and real songwriting talent and it changes his life. Cooper takes us on the journey through Jackson and Ally’s complicated relationship with a lot of heart and a surprising amount of humor. Cooper’s performance as an outlaw country star falling out of the spotlight and into the bottom of a bottle grabs your attention when he saunters on screen and never lets go.

Despite all the fantastic work Cooper does directing and acting in the film, Lady Gaga steals the show with her portrayal of struggling starlet Ally. Gaga makes you and Jackson Maine fall in love with Ally the moment she comes on stage in a little New York City club and sings a cover of “La Vie in Rose.” Through the film, Ally grows along with her career as a musician showing the entire weight of the public eye. Even though this is her first major credit as a leading actress, Gaga delivers an Academy Award worthy performance that will leave the theater with you.

For all the great things in this film, the music is one of the best parts. The original songs written for this film, and performed by Gaga and Cooper uphold the tradition of fantastic music set by previous versions of A Star is Born. The trailers gave a glimpse of the stunning on stage performances given by Jackson Main and Ally, but only seeing the film can do justice to the chemistry they share.

A Star is Born will pull your heart in every direction it can go. By the time the film was over, I had felt every emotion I was capable of. This is one of the most powerful films of the year, and sets a new standard for the next time a star is born.