We all love haunted houses, Halloween themed theme parks, the scares, the costumes, the gore… All of these things are entrenched throughout CBS Films’ newest slasher film, HellFest. The film brings back the classic slasher elements and pairs it with the jump scare elements of the modern era. This is definitely a film that brings you back to the days when Halloween, Friday the 13th, Nightmare on Elm Street, etc. were dominant forces in Hollywood. Surprisingly, this wasn’t a Blumhouse film, the company has put the pedal the metal on the horror genre, and helped rejuvenate it… Giving films like HellFest a path to the big screen. The slasher sub-genre in horror officially has a heartbeat again on the big screen thanks to HellFest.

HellFest has everything a slasher film needs. The song or music that you hear every time the killer approaches, a villain that stalks down his victims, and very brutal kills. The villain of the film embodies that of a Jason Vorhees or Micheal Myers. He doesn’t run, he walks. He also has a bit of Mr. Krueger in him, he taunts his victims before he kills them. He uses whatever weapon he can find to murder with, but his main weapon of choice is a knife. This villain is overall what helps make the film so solid. He’s a mysterious character with a thirst for murder and blood, hunting people who don’t scare easily. 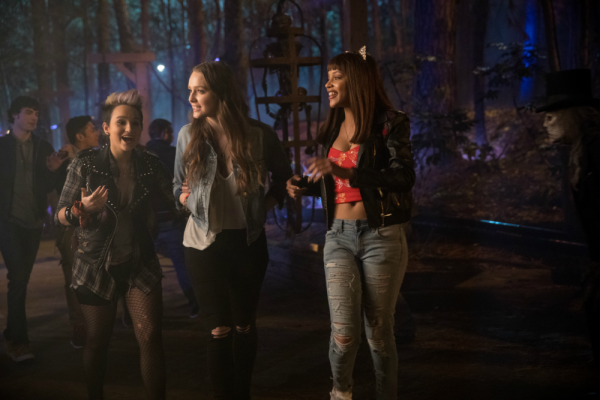 The film also dives into the culture of Halloween and the themed parks around the country. You have Nights of Horror at Universal, Fright Fest at Six Flags, among others. HellFest is exactly that, but a traveling horror festival. There are haunted houses, and many of them, rides, parties, and some intense Halloween themed rituals. We also get the talk of Zombies and how they aren’t exactly scary; kind of taking a jab at the wave of zombie shows and films that have come out over the last 10 years. The zombie sub-genre has owned horror for years now, and HellFest is letting us know that the slasher is returning to dominate. The film takes everything that we’ve known of slasher films across the board and pieces them together to make us truly fear the slasher again. 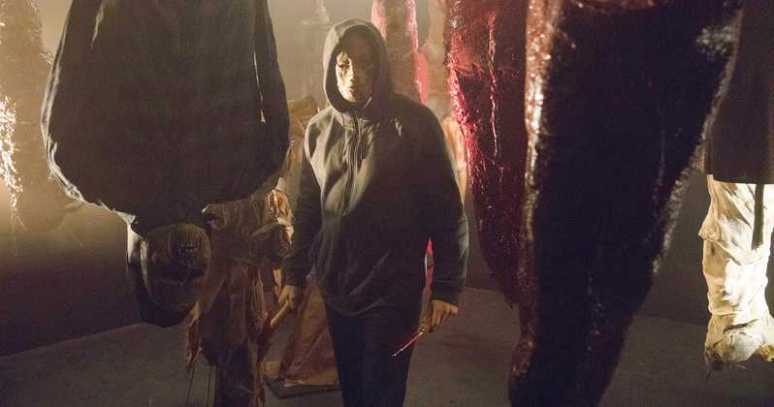 HellFest is your typical slasher film from a plot point, almost. A group of friends gather together to enjoy a night out. On the other hand, a serial killer has decided to turn their fun night into one of true terror. Brooke (Reign Edwards – Snowfall) invites her best friend Natalie (Amy Forsyth – Rise) back into town to hang out. Brooke is living with her friend Taylor (Bex Taylor-Klaus – Scream) who doesn’t exactly get along with Natalie. The girls’ boyfriends Quinn (Christian James – Legal Action) and Asher (Matt Mercurio – Black Lightning) or in Natalie’s case boyfriend to be Gavin (Roby Attal – The Long Road Home), take them out for HellFest. At first, everything is all fun and games. Brooke hasn’t seen Natalie in months because she’s been busy with school, work, and life. Natalie needs a break from all the stress, and she really likes Gavin. All of these things build up to an intense night out. The rumors had already spread about a man going through haunted theme park and murdering a girl in the county over. Her body wasn’t found for days because they thought she was a prop. Only for our group of friends to find out that the serial killer was, in fact, real, and they were his next targets. 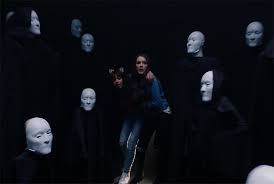 Overall, this film does so well as a slasher film. The story starts off kind of awkward but as you put the pieces together, it builds well and creates a really intense atmosphere. This is definitely a one of a kind movie that can’t be duplicated. There were so many layers and effects to the film, that you have to respect. HellFest goes down as one of my favorite slasher films of all-time. I highly recommend for anybody that enjoys the sub-genre. HellFest definitely brought the slasher film back, and the guest appearance by Tony Todd made it all the more glorious. John Carpenter should be and Wes Craven would be proud of this film. Hopefully, now we get more creatives in Hollywood to bring the excitement back to the slasher film.

Have you seen HellFest? Did you enjoy it? Tweet us how you feel about the film @SuperBroMovies!

On Halloween night, three young women and their respective boyfriends head to Hell Fest — a ghoulish traveling carnival that features a labyrinth of rides, games and mazes. They soon face a bloody night of terror when a masked serial killer turns the horror theme park into his own personal playground.