The writing was on the wall for Venom before the cameras even started rolling.

Producer Avi Arad has made a series of questionable decisions with Sony’s catalog of Marvel characters. After shoving Eddie Brock/Venom into Spider-Man 3 and attempting to build a shared universe with The Amazing Spider-Man 2, Arad decided to combine these two ideas to make a movie centered around Venom that’s also intended to jump start yet another shared universe. But wait, there’s more: due to their deal with Marvel Studios, Sony can’t use Spider-Man in their film. What could possibly go wrong? 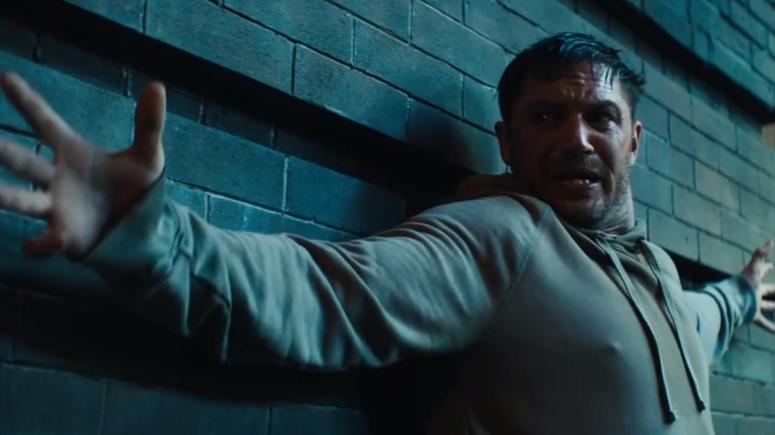 A lot. On a storytelling level, Venom is a total failure. The story follows Eddie Brock (Tom Hardy), a well-respected investigative reporter with his own show who we know is well-respected because his lawyer girlfriend Anne Weying (Michelle Williams) tells him he’s well-respected. Brock scores an interview with Carlton Drake (Riz Ahmed), a billionaire inventor and the leader of a bioengineering group known as the Life Foundation.

Because there needs to be a movie, Brock completely blows the interview by confronting Drake with confidential materials on the Life Foundation’s illegal experimentation that he stole from Weying’s computer, leading to Brock losing both his and Weying’s jobs, as well as his relationship.

If Brock’s life has become a drag at this point, it doesn’t come close to the feeling of watching Venom‘s opening 20 minutes. Every cliche of early 2000s superhero movies comes out to play: a romance with zero chemistry between the leads, a vague, evil corporation, the lead character making an irrational decision, the list goes on. Director Ruben Fleischer brings zero of the style he brought to Zombieland or even Gangster Squad to the film. He’s the directing equivalent of autopilot.

The film then jumps forward sixth months. The disgraced Brock is approached by a former Life Foundation employee who informs Brock that Drake is using an alien species known as “symbiotes” in hopes of advancing the human species, killing various test subjects in the process. Ever the genius, Brock breaks into the Life Foundation and finds himself bonded to one of the symbiotes known as “Venom”, giving him the ability to turn into a hulking, hybrid creature.

This is where the movie really picks up. Without question, Tom Hardy carries this movie as both Brock and Venom. Even before bonding with Venom, Brock is kind of an erratic weirdo. As he swaggers through scenes with a bizarre, manic energy, you never really know what he’s doing, but you can’t tear your eyes off of him. Directly after the bonding, Hardy gets to do some body humor- such as diving into a lobster tank in the middle of a fancy restaurant- that actually elicits quite a bit of laughs.

On the other end of the spectrum, Hardy’s Venom is everything you’d want from the character. His voice is growly, deep, and almost seductive, and Hardy seems to relish in the alien nature of the character. The screenplay- which I’m not surprised to find out was written by three different people- actually makes decent use of the Eddie and Venom dynamic. They have a strange friendship that’s quite heartwarming; two “losers” in their respective worlds coming together to be something fearsome.

In terms of visuals, Venom as a character looks pretty spectacular. Sure, the CGI could be cleaned up a bit, but Venom looks like Venom, and after Spider-Man 3 bungled that so hard, that’s something of a miracle. The action is a bit hit-or-miss, however. While it’s fun to see what’s essentially a giant monster tear up bad guys, there’s not much of a finesse to it, nor is there any blood or brutality to Marvel’s most violent character. It’s just serviceable, with the exception of the climax, which I’ll get to later.

Now that we’ve thoroughly praised Hardy, how is the rest of the film? Not much better than the first act. Ahmed and Williams are utterly lifeless in their parts, moreso props for the film to use to facilitate the plot. Speaking of, as in the third act, Venom continues to peddle out every cliche in the book as if coming up with an interesting story around a giant alien monster was that difficult.

Things happen simply because they happen. Every second without Tom Hardy’s Brock onscreen is a missed opportunity, so it’s a bit of a relief that the film ends on a high note. Drake acquires a symbiote of his own, known as “Riot”, and proceeds to fight Eddie in a fight that’s such a mess of poorly-rendered CGI, it’s kind of a blast. The Saturday Morning cartoon madness of seeing two liquid aliens going at each other like animals is so irresistible that one wishes the film would’ve gotten there far earlier.

As the film ends on a very exciting mid-credits tease, I didn’t find myself hating Venom. On most levels, this is a dumpster fire of a film, one that doesn’t even try to tell a good story. However, Tom Hardy and the characters of Eddie Brock and Venom are so much fun that it’s easy to recommend this movie for some mindless enjoyment.

I’d be interested to see where Sony takes this character, since the foundation is totally there for something great. They may have fumbled out of the gate, but I’m in for the further adventures of Eddie Brock.