Spider-Man: Into the Spider-Verse wasn’t one of my most anticipated movies of the year. Since the start of 2018, the then Untitled Miles Morales Spider-Man animated movie was sort of just there in the background, not really a film I was keeping tabs on. Especially with another Star Wars story on the way and the comic book epic Infinity War just around the corner. However, the more I kept hearing about new cast members coming on board, to the hearsay words of stunning animation like nothing we’ve seen in a animated film before, my interest continued to grow, albeit slowly.

Fast forward to a week ago, when reviews and reactions started dropping online and Spider-Verse finally started getting the attention and love it deserved, and my excitement for the film now at an all time high. Now that I was finally able to see it on a Thursday night early screening, it is safe to say that Spider-Man: Into The Spider-Verse is one of the best films of the year, and undoubtedly the best animated film of the year. From it’s stunning graphics and surreal animation that makes you feel like you’re watching a comic book, to its stellar cast and amazing vocal performances, this film really has it all.

Spider-Verse tells the story of Miles Morales, a young kid from Brooklyn trying to adjust to life at the new elitist school he goes too, as well as living up to the expectations from his parents and teachers. Miles never really feels like he fits in, and even has problems connecting with his (literal) police officer of a father. It’s only when he spends his time graffiting with his uncle Aaron that Miles really seems like himself, but that changes after getting bit by a radioactive spider, bringing him into the world of Spider-Man.

The story accelerates from that point, diving into an interdimensional adventure that sees the likes of the classic Peter Parker Spider-Man, Spider-Gwen, and many more Spider-people joining the fray and helping Miles learn what it means to be Spider-Man. The story, for the most part, is by the books and has some of the most convention storytelling, but that doesn’t keep it from being a tight and smart script; the dialogue is quick and witty, and there is no fluff or wasted time in this story, everything is for a reason.

What makes this film work so well is thanks in large part to the fact that it really understands what Spider-Man represents and what the character is all about. Whether it be a Man, Woman, or even pig behind the mask, the character traits and values shine through any of the Spider-People, and make this movie a celebration of what the character means more than anything else. Don’t let the amount of Spider-Men fool you, though; this is a Miles Morales story through and through.

Miles is without a doubt the most compelling and exciting character in this story, with his journey throughout the film being the focal point. His emotional character arc from dissatisfaction to doubt to acceptance was such a thrilling one to watch, thanks to Shameik Moore’s performance as the title character. The levity he brings to the surprisingly dramatic and emotional moments of the film are the best parts of his performance, and Moore certainly bounces off of the rest of that cast amazingly as well.

Brian Tyree Henry, who plays Miles’ father in the film, has amazing chemistry with Shameik Moore and together the two bring some of the most emotional and character driven relationships in a Spider-Man film. Mahershala Ali, who plays Uncle Aaron, has some time to shine as well, and it is when his character is with Moore’s character Miles that they really show some of the most human parts, some of which are even more convincing then some live action films.

It’s no doubt in my mind, however, that Jake Johnson as Peter Parker has the best relationship and scenes with Miles, as the trainer/trainee dynamic that is present throughout the film is something so interesting due to the fact that this is something that no other Spider-man film before it has ever tried to do. Seeing a Peter Parker who has been in the hero business for 22 years was a highlight of the film for me. His witticisms and signature Spider-Man humor are even funnier coming from the voice of an aged hero who’s prime is nearly behind him. This was such an interesting take on the character and one that won’t be forgotten. Hailee Steinfeld also gives Spider-Gwen her big screen debut, and is a wonderful supporting character that shines with Miles and Peter. Other versions of Spider-Man, such as Spider-Ham voiced by John Mulaney and Peni Parker voiced by Kimiko Glen, take some smaller roles in the film but each get their moment. If there is one side character I want to focus on in this review though, it’s Nicolas Cage in his turn as Spider-Man Noir. With a hilarious voice performance he still steals the show every time he’s in a scene. 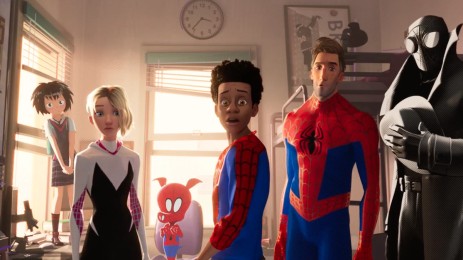 Liev Schreiber as Kingpin is the most surprising performance from the film, as what I expected to be a one-note villain turned out to be a bit more nuanced and emotional than what is expected of animated movies and a compelling and sometimes scary villain that really poses a threat to our protagonists. Liev brings a real gangster and threatening voice to the role, and they could not have picked a better actor to do it.

With a great story and creative team, as well as an all star cast of voices, Spider-Verse elevates itself from other animated and comic book films. The animation really pops out of the screen, and the film takes full advantage of it’s cutting edge aesthetic making it really feel like you are watching a comic book. It uses the style to show the action in a way live action comic book films never could. It’s an absolute joy just to be able to look at this film, but pairing it with such a heartfelt and fun story as well as an amazing voice cast and soundtrack, you’ve got one of the best films of the year.

I didn’t think Spider-Verse was going to bring anything new to the table when I first heard it was announced years back. I thought it was just another cash grab. I have never been more wrong in my life. Spider-Man: Into the Spider-Verse is one of the most authentic Spider-Man films ever made, probably even the best. It’s story and emotional journey that it takes the character of Miles Morales on not only does that character justice, but it honors the legacy, spirit and moral values that we all love Spider-Man for, and why we read his stories and watch his movies. Not only that, but this film lets you know that anyone can be Spider-Man and really, who doesn’t want that? – Ernesto Valenzuela

Spider-Man: Into the Spider-Verse Swings into Theaters December 14th

Spider-Man: Into the Spider-Verse: Spider-Man mentors a teenager from Brooklyn, N.Y., to become the next web-slinging superhero.