The CW’s Arrowverse kicked off with its annual crossover with The Flash this past Sunday Night. The episode starts with Arrow’s Oliver Queen who wakes up realizing people believe he is Barry Allen, and vice versa for Barry also. The two now enlist the help of their friends to fix the mess but a bigger problem lies ahead of the heros.

The Arrowverse has always had a problem of balancing out the story structures and where to put its long list of characters and Part 1 to Elseworlds falls victim to that. The crossover certainly did not feel like a real flash episode but it also certainly did not feel like it was part of a bigger crossover. I will give the writers credit on really having fun on Oliver and Barry’s switched lives. Felt a little too familiar and felt distracting to the bigger problem ahead of the heros but definitely entertaining.

The debut of LaMonica as the Monitor was no disappointment as he recruits psychiatrist John Deegan in helping him change reality. The Monitor is a great villain in the comics and it was certainly really cool seeing him in the Arrowverse who did good by his debut so far. The easter eggs throughout the episode were fun to discover like a different flash who tries to go up against the Monitor in the beginning of this episode. 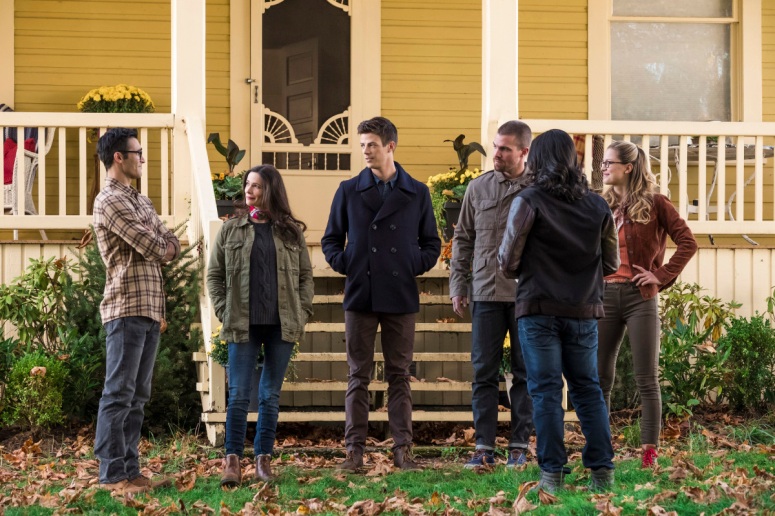 When Barry and Oliver go to Kara’s Earth,  the Arrowverse debut of Lois Lane finally comes into play. Elizabeth Tulloch’s portrayal of Lois Lane from the little bit of what we go to see of her, seemed perfect for the Arrowverse. Once Kara and Clark both join Barry and Oliver on Earth 1 in defeating Amazo, it was a scene of showdown worth being in awe over despite Barry and Oliver being each other. Seeing a Supergirl and Superman punch Amazo together is what makes these crossovers worth watching over moments that we never thought we would get to see after the very first episode of Arrow. Little do we know as the viewers what that would then entail.

The best part of this episode was Oliver and Barry being in each other’s shoes and embracing the personalities that come with it. It showed the growth they both have gone through while also gaining a sense of respect for one another. Not at first, but after they have argued and talk it out, it was the reason they take down Amazo. Switching lives will certainly give a bigger perspective towards each other.

Part 1 was a good edition to the Arrowverse but needed a better story structure and less distractions to have been a better start to a crossover. Treating part 1 as a literal part 1 to a crossover hurt what could have been much better but nonetheless, entertaining. Especially in seeing Oliver and Barry react to each other’s switcharoo and the dynamic those two created surrounding that fact. Part 1 does a good job in setting up the anticipation for Ruby Rose as Bat Woman, as the trio of Oliver, Barry and Kara must now go to Gotham to discover how to solve the mess.

When Barry Allen (Grant Gustin) and Oliver Queen (guest star Stephen Amell) wake up one morning and realize they have swapped bodies with each other, the two set off to find out what disturbed the timeline to cause such a shift. However, things quickly go from bad to worse when they present their case to Team Flash and the gang doesn’t believe them. Barry and Oliver realize they need Supergirl’s (guest star Melissa Benoist) help and travel to Smallville on Earth-38 where they end up meeting Kara’s cousin, Clark Kent (guest star Tyler Hoechlin), and intrepid reporter, Lois Lane (guest star Elizabeth Tulloch). LaMonica Garrett guest stars as The Monitor. Kevin Tancharoen directed the episode written by Eric Wallace & Sam Chalsen (#509).

You can watch the Elseworlds Crossover now on the CW App or the CW channel.

What did you think of Part 1 to Elseworlds? Let us know over at @superbromovies on twitter!