Just as the new standalone Black Mirror film Bandersnatch begins with an advisory, so too does this review. Do not come out of this piece trying to peg the film as good or bad in some binary way. If you need a recommendation, then mine would be “Fuck yes! Go watch it now.” Almost every person will have a different journey from start to finish, to middle to finish, to start to finish.

Bandersnatch may not be the first of it’s kind as a choose your own adventure interactive movie, but it is unprecedented something like this could be released at such an accessible and credible level. Writing a review of a branching narrative, unique to almost every viewer, is a task not unlike the one the movie’s main character, Stefan, undertakes. The movie is very meta in that it follows a young, fledgling game designer, in 1984, whose dream it is to create a choose your own adventure video game based on his favorite book, Bandersnatch. Stefan (Dunkirk’s Fionn Whitehead) has an interview with a fast growing tech company known for it’s lead designer Colin Ritman (We’re The Millers’  Will Poulter). Despite some viewer driven differences, Stefan begins working on the game. At the same time, he is having sessions with a therapist regarding some unresolved childhood trauma and guilt he feels over his mother’s death.

The film starts you with simple choices to ease those unfamiliar with the format into the process. What cereal do you eat for breakfast? What music do you listen to on your way into the city? The black edges of the screen encroach from the bottom and two text choices appear. The film gives you 10 seconds to choose, otherwise it picks one at random. Movie reviews don’t normally talk about the technical side of things or the smoothness of the presentation, but there are no complaints here. There was no pause or awkward camera edits between the footage running just before and after a choice. Watching once on my phone, I got buffering just after a choice. Netflix has said that this was a particular technical hurdles as the service can usually load an entire episode’s worth of footage early on to prevent buffering. But with each viewer changing what comes next every few minutes, using their old process would not be enough. Despite, that one occurence, the process was provided incredible escapism and should for most depending on internet speeds. 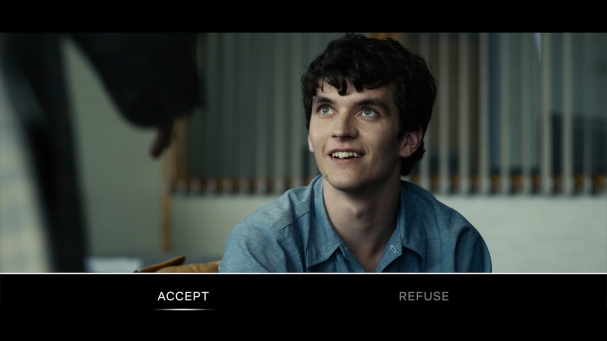 My first play/watch through was pacifistic one. I had Stefan keep his head down. He resisted his curiosities and emotional outbursts. I just wanted to finish creating the game before the deadline set by the company. Ironically (but unsurprisingly in Black Mirror fashion), this proved to give me the most mediocre ending of all. It was also the shortest run time with about 50 minutes. Without spoiling, this ending was way too meta, in an inane way. The credits rolled, but in the corner, a framed box came up allowing me to go back to one specific point about two-thirds of the way through the story. This time, at the point I was rewound to, I made a decision that put Stefan in a more desperate situation that spiraled out of control and into a finale that felt incredibly rushed. This ending was Black Mirror brand bleak, but the kind from third-rate episodes where the twist is narratively predictable.

There are five “main” endings to the film Bandersnatch. A main ending refers to what came of Stefan and his Bandersnatch game. But around that, several discrepancies in the lives of the side characters can also exist depending on each viewing. In another meta moment, most endings have a news segment where a journalist reviews the release of the game, giving it a rating out of 5 stars. Series creator and Bandersnatch co-writer Charlie Brooker use to be a video game journalist. My third ending was my favorite. It was the most wholesome ending and was the furthest in context from the other four, while also staying within the rules of the universe set up. It’s unfortunate that this ending and the one described just before it come about from an ill-written narrative device. At one point in the story, Stefan finds himself in front of a locked container. He approaches it and the branching path options come up in the form of what password he should enter. Both times, whatever password you choose relates to what you find inside. This effectively kills the suspense and makes the prior choices feel irrelevant.

It’s reminiscent of the failed ending to the video game Mass Effect 3. That series was always about choice but the ending to it all was dictated by which of three doors you decide to go through. After the wholesome third ending, the credits rolled but Netflix did not let me reset to any point this time. My final go-around was a lot more chaotic. This was by design to test the differences from my first viewing. This eventually got me the coveted 5/5 star ending (from the in-universe journalist) and was capped by an amazing and appropriately meta post-credit scene.

It’s hard to criticize any piece of Black Mirror media on the basis of discontent. The stories are supposed to leave you feeling perturbed. Each episode of the series focuses on some aspect of technology’s involvement in humanity, but this time we, the viewer, are the technology directly affecting the humans of this story. Going deeper, a running meta theme of the story is that sometimes giving a consumer too much control is not good. That we should only give them the illusion of it. So some of the narrative constraints, such as two choices being almost the same, could be deliberate as the writer’s like to toy with us as much as we like to toy with the characters. This isn’t a role-playing game. Do not think of Stefan as your avatar. Bandersnatch is a film that is incredibly hard to label or put into a box. Its missteps may not even be witnessed by some viewers with no intent of multiple viewings. But it is an experience and milestone in entertainment that should not be missed.

Want to talk spoilers with me? Tweet me – Cole