Art by: Francis Manapul, Marcus To

The epic finale that everyone will be talking about! After the unimaginable happens, the DCU must band together to defend Earth from annihilation. Before the end, new alliances will be forged…and some heroes will be lost forever. Don’t miss the event that will set the stage for the Justice League in 2018 and beyond!

DC’s No Justice storyline comes to an end with issue 4 this week and it’s a hell of a ride. As the Omega Titans arrive at earth to devour it, our heroes both on land and in space work double time to figure out how to stop this impending threat. Brainiac is gone, and his son Brainiac 2.0 has stepped in for him and he has a lingering presence here. He’s a bit annoying, to be honest, and only serves as a plot device. However, I think he’s going to be someone we see down the road in a better role.

The main attraction heats up as things almost come to an end for our heroes, each Justice League team gets a chance at the spotlight here when they finally figure out how to get rid of the Titans. It’s a moment that unites the abilities of all of the heroes and villains involved, while also building up towards the conclusion of the story. 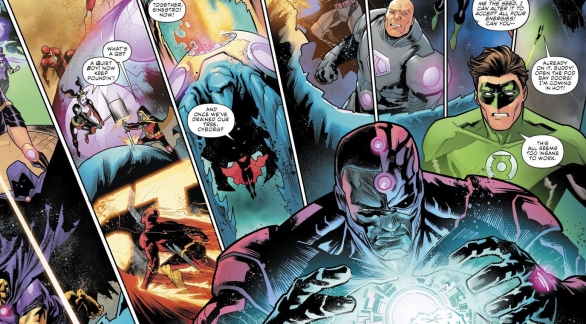 There’s awesome action that goes hand in hand with much more consistent art than last week’s issue. The story has a conclusion that not only finished what it started but also sets up a new era for DC. The ending words NEW JUSTICE say it all, a different way of defending the universe will be used by a much larger Justice League. Heroes new and old will now be making up three main teams, all under the Hall of Justice. Joshua Williamson, Scott Snyder, and James T Tynion IV will be steering the new books going forward and I can’t wait to see more of what they did here.

No Justice, even with some of its faults, never fails when it comes to maintaining my interest. It has stakes, emotion, and interactions from the best characters DC Comics has to offer. The ending sets up a new frontier after thousands of planets have now re-entered the universe, while also teasing what’s behind the source wall. I’m sure Justice League: Odyssey from Joshua Williamson will reveal much more, but I think we’re going to be seeing the ramifications of this throughout every other comic series as well.

As the story comes to an end, a new type of justice begins. The Justice League is now split into various teams, all with unique purposes and plenty of heroes to back them up. The art is much more consistent this week and delivers on the scale. Some story beats don’t work as well as others but at the end, it comes down to the core elements that work great. No Justice is a lot of setup for what’s to come in the DCU, starting next week with Justice League #1 from Scott Snyder. I’m excited to see what they’ll be bringing to the table as it seems DC is on a roll with their current lineup of comics.