The Guardians of the Galaxy were a huge success upon their arrival to movie theaters everywhere back in 2014. A big part of the film’s success is that of Director & Writer James Gunn, who made us fall in love with a talking Raccoon and a tree. In a matter of weeks, we’re going to see the Guardians of the Galaxy interact with the other part of the MCU in Avengers: Infinity War. This is the first time the Guardians will appear out of their regular solo films, meaning that they’re in the creative hands of other directors and writers. Today at an Awesome Con Q&A, Dave Bautista, the actor who plays Drax The Destroyer in the aforementioned films,  mentioned that James Gunn did write some dialogue for the Guardians in the upcoming crossover film. 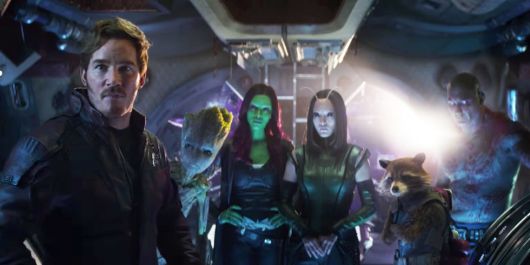 It is known that Gunn is serving as Executive Producer on both upcoming Avengers films, but the fact that he wrote some dialogue for his galactic group shouldn’t surprise anyone, especially knowing that we’re talking about a film of this scale. It is another known fact that The Russo brothers have been working along with other MCU directors in order to grasp the essence of the characters, something that can be lost in a film of this size. You can even see in the latest Avengers: Infinity War trailer that trademark humor that is associated with Gunn’s Guardians of the Galaxy, so fans shouldn’t expect nothing less from them in Avengers: Infinity War.

What are your thoughts on this? Does the aspect of James Gunn writing some dialogue for the Guardians in Avengers: Infinity War excite you? Let us know over at @SuperBroMovies and in the comments below!

Avengers: Infinity War – Iron Man, Thor, the Hulk and the rest of the Avengers unite to battle their most powerful enemy yet — the evil Thanos. On a mission to collect all six Infinity Stones, Thanos plans to use the artifacts to inflict his twisted will on reality. The fate of the planet and existence itself has never been more uncertain as everything the Avengers have fought for has led up to this moment.

26 thoughts on “James Gunn Wrote Some Dialogue For The Guardians Of The Galaxy In ‘AVENGERS: INFINITY WAR’”