After the premiere of Ant-Man and The Wasp, this last week fans have been thinking about two possible team-up movies in the MCU’s future. The first being The Young Avengers lead by Cassie Lang the daughter of Ant-Man, and The Thunderbolts considering Ghosts connection to the team and being a fan favourite among readers of the comics. The Thunderbolts were originally a group of villains formed by Baron Zemo to disguise themselves as heroes so they could learn more about The Avengers and Fantastic Four, but now sometimes they are just an anti-hero group or a group of villains being used by the government. With the MCU being different from its comics counterpart expect to see this within the fancast aswell. The easiest part about transitioning the team into the MCU is that their leader has already been established.

Zemo’s appearance as the main villain in Captain America: Civil War was not the traditional take on the character but in my opinion was a very welcomed change. He didn’t go out of his way to fight The Avengers but used strategic planning to get them to tear themselves apart. However, it was shown that he was a leader of a Sokovian special forces unit so we know he can fight. With his skills of a solider and immensely vast strategic knowledge this would be the perfect fit to lead the group.

Alright before you leave now hear me out on this decision. Ghost making her debut in Ant-Man and The Wasp is what sparked this whole conversation so I feel this Would be the best way to connect it. To change the Story of Erik Josten and make him Erik Foster the son of Luarnce Fishburne’s Bill Foster. Making him the new Goliath is a smart choice considering his physical presence. His first major appearance in a movie was in The Hunger Games where he played Thresh. Most recently who’ve probably seen him in Terminator Genesis.

Erik Josten was originally a marine that went awol and was recruited by Zemo who later would go on to have a super soliderserum injection himself making him much like Zemo. After a while he is later presented with technology stolen from Hank Pym allowing him to grow in size. This is where it fits into Ant-Man and The Wasp, perhaps Bill Foster had a son and while he was still mad at Hank he also radicalized his son who now has turned to a life of crime. As The Thunderbolts roll on like many of the other member Erik begins to enjoy being a superhero. 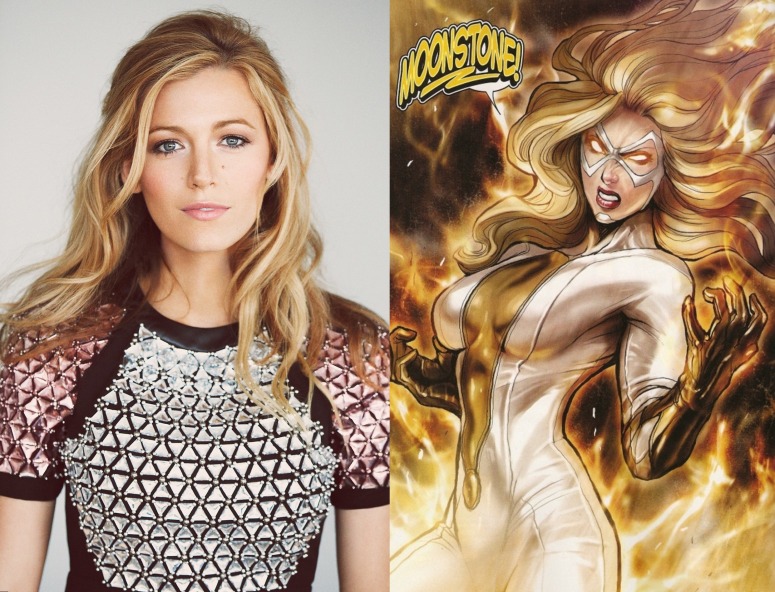 Moonstone in the comics is a beautiful psychiatrist who tricks the original moonstone into giving her his stone thus killing him and giving her superpowers. She could possibly also have some connection in the MCU as well. In the third version of the Masters of Evil Egghead, who was in Ant-Man and The Wasp and was the father of the main villain  Ghost recruited her to join so she could possibly already know Goliath/Ghost. Once again as the team does good deeds Moonstone begins to like being a hero and even becomes somewhat of the leader as they fight Zemo to stay good. Eventually she even has a run as Ms. Marvel.

Blake Lively would be perfect for the role, She’s beautiful, charismatic, and could carry the movie with her star power. Her name alone would put people in seats.  The award-winning actress could also ask her husband Ryan Reynolds tips on how to play a superhero. Her two most notable movies are The Town and The Shallows and in both, she does an amazing job and now maybe it’s time for her to take a leading role in a superhero movie.

Screaming Mimi aka Melissa Gold had a troubled childhood and was an eventual runaway who ended up joining a wrestling team to make some money. Her rough upbringing gave her a rougher outlook on life which would require someone with some good range to play the part. Hence Holland Roden.

Roden is most likely know for her role in the TV series Teen Wolf  as Lydia Martin. In which she does a fine job and I believe she could really pull off the charter and be a constant leader for the team.

Fan Bingbing is no stranger to playing a superhero as she was featured in X-Men: Days of Future Past as Blink. Now I believe it would be time for her to take on her second role as a Marvel superhero. Not very easily recognizable it would be perfect for her to take the role of the only true superhero on The Thunderbolts. The only problem we could have with her casting is she was briefly featured as a doctor in the Chinese version of Iron Man 3.

A truly vital member of the team Jolt had experiments done on her giving her the full range of powers she has. After escaping she sought out The Thunderbolts to join their team not knowing they were truly evil. Her spirit and heroicness helped changed many of the team from the path of bad to good.

Abner Jenkins is a founding member of the team and a pilot who was tired of his boring everyday life so he switched to a life of crime as Beetle. A very charismatic character he also begins to like the idea of being an actual hero like the rest of the team.

After last years hit film IT, in which Skarsgård played the killer clown Pennywise, no one should be able to question his ability to play a frightening character. That’s exactly what he could bring to the character Jack O’ Lantern. With his slender and stringy body he portraying the character as a very frightening physical enemy. Jack O’ Lantern is nothing short of a creepy character, to begin with. He would, in my opinion, be the best choice for the villain of the film along with some fellow members of The Skeleton Crew.

Steven Levins is the second incarnation of Jack O’ Lantern and I chose him because he was once a member of The Thunderbolts and could possibly after the events of the first film, become a member of the team.

Finally, I would have one last character pulling the strings. Taskmaster would be in charge of The Skelton Crew and also one of the members of The Thunderbolts. A tremendous villain that many would love to see come to the big screen who would be my pick to be the main antagonist of the fifth Avengers film.

Christian Bale already knows how to fight from his time as Batman and with Taskmaster being able to master anyone fighting style this is very important, also he showed us he can go dark with American Psycho so if I want one person to play Taskmaster it would be Bale.

You didn’t know you wanted it but now you do.

Well, that’s my fancast for the Marvel Cinematic Universe version of The Thunderbolts. Let us know what you think about the list by tweeting us at @SuperBroMovies. Keep coming back to our site for the latest in blockbuster movie news.