With San Diego Comic-Con underway, fans will finally get to see new footage of all their most anticipated films. Whether it be Aquaman, Shazam, Glass, one that stands out the most is the new Venom movie with Tom Hardy. Many fans weren’t too sold on the first trailer, leading many to rely on the footage at SDCC.

Well it seems that the film has gained a much larger appraisal from the fanbase. Sony really wanted to get this film right and it seems as if they’re heading in the right direction. The extended trailer of Venom that was shown at SDCC and boy does it pack some surprises. Not only does it show some rated-R stuff such as Venom biting someone’s head off, it also shows us the villain of the film. We’ve known that Carlton Drake, played by Riz Ahmed, would play some sort of pivotal role juxtaposing Hardy’s Eddie Brock. 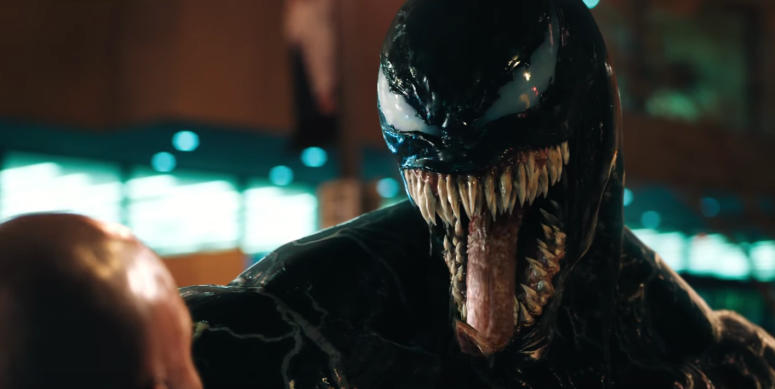 In the footage, we see Drake don the symbiote, thus turning him into the villain Riot. Our own writer in attendance at the Con said Riot had a much larger stature than Venom in the film. Not only did he trump him in size, he was also silver in color and had a sheen look to him.

Venom has so far been a strong contender at SDCC but with Saturday’s lineup of Shazam and Aquaman, DC seems to be the showcase of the weekend. What are your thoughts on Riot being the villain of the new Venom movie? Let us know your thoughts over at SuperBroMovies and be sure to stay tuned for more SDCC news! – JB Baker