After reinvigorating a franchise thought dead with a knockout seventh installment in 2015’s CREED, directed by Ryan Coogler, expectations were high for a sequel once it was announced. However, being too busy with directing duties for the cultural phenomenon that is Black Panther, Coogler had to step down from directing duties and find a new director to being a fresh take on what was originally a passion project for Coogler, and one that turned out to be his first Blockbuster Success. Enter director Steven Caple Jr., who, having only one indie film under his belt, managed to continue the Creed story in this hotly anticipated sequel.

CREED II starts with Adonis at the top of his game, overcoming personal issues from the first film and embracing what came before him as well as starting his own legacy and family with Tessa Thompson’s character Bianca. This status quo is shaken by the arrival of Viktor Drago, boxer of infamous Rocky IV Ivan Drago, who killed Adonis’ father, Apollo, in the ring. With a public challenge issued. What follows is a mostly successful follow up to the lightning in a bottle that was the first CREED film, with director Steven Caple Jr. honoring what had come before him while telling his own story of family, mending relationships, and healing old wounds.

Caple directs his cast in such a fantastic way, as the same emotional performances that made you fall in love with Stallone, Jordan, and Thompson in the first place are back again. Michael B Jordan gives another remarkable performance as Adonis Creed, showcasing a whole other side of the boxer that we haven’t seen before, one struggling to stay at the top as well as dealing with a newfound family in his daughter, Amara. Tessa Thompson’s Bianca is given so much more to do this time around, as the focus on family allows her character to take more of a spotlight and shine right next to Adonis through the hardships in this film. 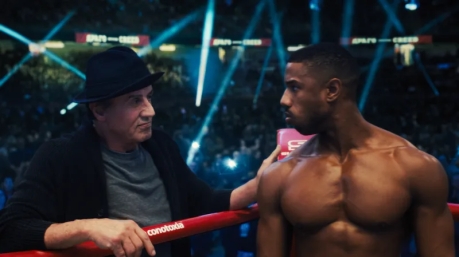 Stallone, of course, brings the same dramatic presence Coogler uncovered in the first CREED, with Caple using it as much as he can. Family is also at the heart of Stallone’s character arc, and watching the character of Rocky Balboa metaphorically pass the baton to Adonis is a beautiful thing to see. Stallone brings the same wit and charm to the character that makes for some great comedic moments as well.

I would be amiss not to mention the powerhouse duo of antagonists that are Ivan and Viktor Drago, the two after the blood and legacy of Rocky and Adonis. Taking Drago, a villain who was in what was undoubtedly the most cheesy of all the Rocky movies, was a risky move that could have come off just as cheesy and lose the dramatic weight the Creed films brought to the Rocky Franchise. Luckily, the Drago’s are translated into the gritty world of CREED in a realistic, and nuanced way thanks yet again to Steven Caple Jr. Ivan Drago now has more depth and character than he was first introduced to the big screen over 30 years ago. The relationship with his son and the deep parallels between Viktor and Adonis’ journey in the first CREED make for one of the most interesting dynamics and concepts of the film.

The cinematography, while not as creative when it comes to the fights of the film, is still very well done with some great shots in the film, and showcase the characters in great ways with some amazing establishing shots of locales as well. The iconic training montages that we all know and love from the franchise are back in full force in this film, and are shot well and paired with an amazing soundtrack and score. Ludwig Göransson, a frequent Ryan Coogler collaborator and composer of the first CREED, returns a second time around to compose some emotional and epic music for the Creed vs Drago rematch. The sound design is one of the best aspects of the film, paired with the score and soundtrack, you can feel every punch thrown, every hit taken, and every fall to the mat thanks to the expertly crafted sound of the film. The audio effect of boxing gloves slamming together has quite the effect, and the sound almost tells it’s own story in the film. It is truly superb. 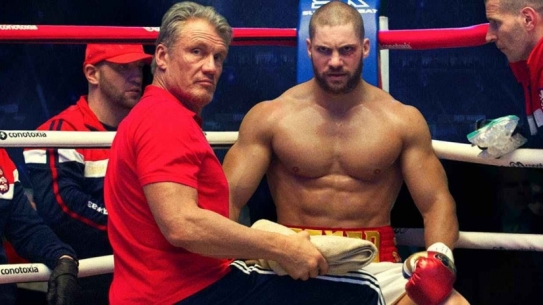 Unfortunately, the film, while not at all at the fault of Steven Caple Jr., is extremely predictable about an hour into the film, with the rest of the story beats laid out expertly with some cliche storytelling tropes. Thankfully, this isn’t much of a problem at all thanks to the excellent execution from the cast and crew of the film. Overall, while not as groundbreaking as the first, CREED II manages to subvert expectations of the Creed and Drago fight and bring a satisfying conclusion to the rivalry that began 30 years ago. With a touching sgtory about family, Steven Caple Jr. and company made a satisfying sequel, albeit one not as original or groundbreaking as the first film. It’s still an amazing time a the movies, though. – Ernesto Valenzuela

CREED II – In 1985, Russian boxer Ivan Drago killed former U.S. champion Apollo Creed in a tragic match that stunned the world. Against the wishes of trainer Rocky Balboa, Apollo’s son Adonis Johnson accepts a challenge from Drago’s son — another dangerous fighter. Under guidance from Rocky, Adonis trains for the showdown of his life — a date with destiny that soon becomes his obsession. Now, Johnson and Balboa must confront their shared legacy as the past comes back to haunt each man